Statesville’s Congregation Emanuel synagogue, built in 1892, was illuminated on the evening of Monday, November 9, to commemorate Kristallnacht, or Crystal Night, the Night of Broken Glass.

Kristallnacht’s name signifies how the streets were covered with broken glass from all the Jewish windows destroyed by the German Nazis. 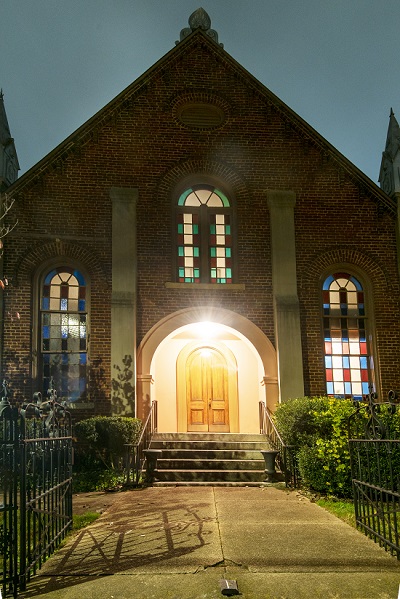 #LetThereBeLight campaign’s message was one of hope, to illuminate the world against the darkness of hate. #LetThereBeLight inspired synagogues worldwide to leave on lights with a promise to always shine light to expose antisemitism and other forms of bigotry.

Congregants — who were born in Düren, Germany, fled the Nazis but not before losing family members and witnessing unspeakable horrors — once remarked that Congregation Emanuel is a real duplicate of the synagogue, in their hometown of Düren, that the Nazis destroyed on Kristallnacht.

On this night, the government-ordered “popular wrath” – destroy everything known to be Jewish. The official Nazi order from Reinhard Heydrich read, “Places of business and apartments belonging to Jews may be destroyed. Non-Jewish businesses are [to be] completely protected against damage (and) the demonstrations are not to be prevented by the Police. As many Jews as can be accommodated in existing prisons are to be arrested,” Heydrich added. “The concentration camps are to be contacted immediately for prompt accommodation of the Jews in the (concentration) camps.”

For many citizens of Düren, Christian and Jewish alike, it was indeed difficult to understand what was happening. For more than 700 years, Jews had lived in this town, had played an important part in the economic, social and cultural life and, just as their fellow citizens, had identified themselves with their hometown.

Across Germany and Austria, a total of 1,350 Jewish synagogues were burnt to the ground or destroyed; 91 Jews were killed; 30,000 Jews were thrown into concentration camps; and 7,000 Jewish businesses were destroyed. Torahs were burned. Jewish cemeteries were desecrated. Houses were ransacked, often by neighbors and acquaintances of the victims.

On the 82nd anniversary of Kristallnacht, we are reminded of the dangerous consequences of bigotry and how misinformation can ignite hatred.