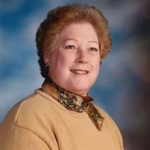 In addition to her father, Linda was preceded in death by, her brother, Steven Scott.

In lieu of flowers, the family request that memorials be given to Gordon Hospice House, 2341 Simonton Road, Statesville, NC 28625.