The Hebrew prophet Jeremiah cried out on behalf of his people and nation. It was wracked by rampant greed and deceit, and the lives of the poor were being trampled upon. “Is there no balm in Gilead, is there no physician there?” the prophet cried (Jeremiah 8:22).

We may cry out the same words today. 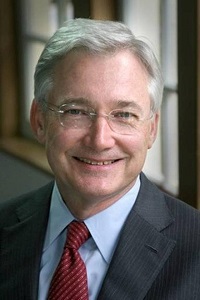 In Margaret Atwood’s horrifyingly prescient novel, “The Handmaid’s Tale,” Gilead is the fictional land where women live under the subjugation of men, and in a time when many women have become sterile, fertile young women called “handmaids” are forced to bear the children of men whose wives cannot conceive.

As the U.S. Supreme Court has reversed Roe v. Wade, handing the lives of women and girls over to the states, women are crying out in righteous rage as their bodies have become the property of the State. The men who love them should join in their rage. A woman’s most personal moral choices are being taken away. Forced birth is becoming the law of the land.

The question debated for centuries is being revisited: When does the life begun in a woman’s body become a human person? It is a moral, legal, medical and philosophical question.

I begin by saying that medicine and philosophy have not determined a “ magic moment” when human personhood begins. Some points in the gestation continuum which have been argued are:

♦ At conception when the genotype is set;
♦ At the post-twinning moment when twinning happens or not (four days);
♦ At implantation when the fertilized egg is implanted in the womb (14 days);
♦ At eight weeks, when the cerebral cortex begins to form and all internal organs are formed. (Aristotle, reflecting the major position of Greek philosophy, said that the male fetus received a soul, or “ensoulment,” at 40 days and that a female fetus at 90 days— which informed the legality of abortion);
♦ At “quickening”, when the mother feels the child move in her womb (16 to 18 weeks);
♦ At viability, when an unborn child can survive outside the mother’s body. Today, with the advances of modern medical science, this point is at 20 to 21 weeks; and
♦ At birth when the infant draws its first breath.

There has been and continues to be no consensus in answering this question. Those seeking to make abortion laws through the years have focused more of these moments of development in their decisions.

New contraception laws governing the use of condoms, the “morning after pill,” IUDs, etc., will now become the focus a fierce public and legal debate based on the question as to when human personhood begins.

The second point to consider is that there is no Christian or religious consensus on the question. The main Jewish position, shared by some Christians, is that human personhood begins at birth when the child draws its first breath. This is based on Genesis 2:7: “Then the Lord God formed man of dust from the ground and breathed into his nostrils the breath of life; and man became a living soul.”

Other Biblical passages have been cited to support one position or another. The only passage that speaks directly to the issue of the value of the mother’s life in relation the life of the unborn life is Exodus 21:22-25. It prescribes that if there is a fight and a pregnant woman miscarries because of the injury, the one who injures her is fined. If, however, the pregnant woman dies of injuries then a capital punishment is exacted. Many religious traditions say that if one must choose between the life of the mother and the life of the unborn child, the mother’s life takes priority.

Those in the Right To Life or Pro-Life movement generally use three passages of scripture to support their position :
♦ Jeremiah 1: 4-5: “Before I formed you in the womb, I knew you.”
♦ Job 10:8: “Thy hands fashioned me and made me.”
♦ Psalm 139:13: “For thou didst form my inmost parts, thou knit me together in my mother’s womb.”

The Christian New Testament is silent on the abortion issue.

For those searching the Bible for guidance or proof texts, the humble wisdom of Ecclesiastes may serve us all well:

The church as a whole has taken a number of differing opinions as to when abortion should be allowed; for example, in the cases of rape or incest or to preserve the life, health and well being of the mother.

Notably, the Southern Baptist Convention in the early 1970s took a moderate position, supporting abortion in circumstances such as these. Now under the sway of the Religious and Political Right, they take the most extreme position on abortion.

States are now passing legislation which forbid abortion from as early the detection of fetal heartbeat (six weeks) with few if any exceptions. The Texas “Fetal Heartbeat Law, ” which passed in 2021, is a sign of things to come. A religious doctrine that human personhood begins at conception is now being enacted into law.

But what if you are a citizen of the United States and the Bible is not your sole moral authority.
What if your individual conscience leads you to another conclusion? What I f you do not belong to a religious community? Should we, as a nation, enact into laws the Biblical interpretation of one set of Christians?

So now we come to the final issue — the separation of Church and State. It is inscribed in the First Amendment to the U.S. Constitution. The “freedom clause” maintains that the religious life of its citizens must be free from state control. Our nation was founded with the principle of freedom of religion. In a modern liberal democracy, the freedom of conscience is protected for all its people.

The “establishment cause” says the State cannot favor, or establish, one religion above others or religion over non-religion. In its new ruling, the U.S. Supreme Court has favored or established one kind of religious belief over others. Women are being forced to obey laws derived from the religious beliefs of a few.

The Founders of our nation feared theocracy because they had experienced the long years of religious wars in England and Europe, where Church and State were bound together. James Madison liked to quote Voltaire that if a nation had one religion, it would characteristically persecute all the others; if it had two religions, they would fight each other; and if it had many religions, they would find a way to get along. Today the rise of Christian Supremacy is heading the nation toward theocracy. It wants a nation of one religion and sneers at pluralism in America. Because of the ruling of the U.S. Supreme Court, women and teenage girls will be losing their lives. The civil strife has only begun. A new civil rights movement is on the horizon.