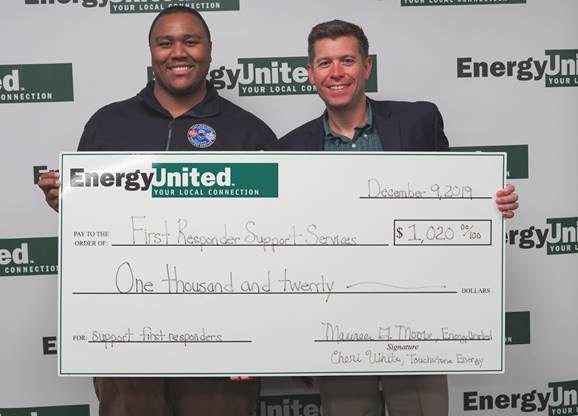 EnergyUnited delivered a special donation for $1,020 to the First Responders Support Services (FRSS) of Statesville on Monday. The donation was made as the result of the electric co-op’s partnership with the Touchstone Energy Hot Air Balloon Team, which visited Statesville in October to participate in the Carolina BalloonFest.

The Touchstone Energy Hot Air Balloon serves as a goodwill ambassador for Touchstone Energy Cooperatives. Over the past 14 years, their balloons have attended numerous annual meetings, farm shows, balloon festivals, family days, rodeos, county fairs and other events. Most recently EnergyUnited hosted its annual employee event at the 2019 Carolina BalloonFest.

FRSS offers counseling, chaplaincy and financial crisis aid. First responders can struggle with the same challenges others go through — bills, divorce, a family death. Those challenges are compounded, however, by the added stress of 12-hour shifts that often put the lives of others in their hands. Emergency workers can also apply to have the Statesville-based nonprofit lend a hand when money is tight. If a responder experiences a personal crisis and is unable to pay their power bill, the organization will provide aid.

“FRSS was founded with a similarly cooperative spirit in mind,” said Andrew Donawa, the nonprofit’s executive director. “We believe that the people who selflessly support our communities each day also deserve support and the assurance of dedicated resources that can they can count on during a time of crisis.”

You can learn more about First Responders Support Services by visiting its Facebook page.