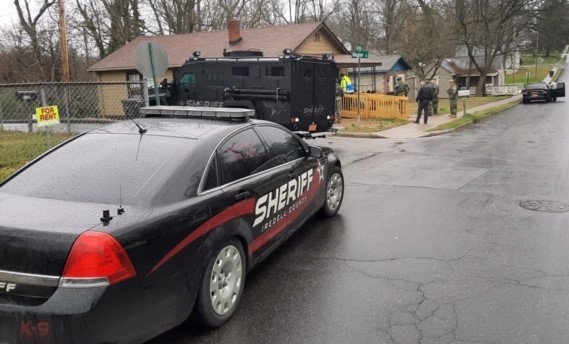 During the investigation, undercover narcotics investigators conducted surveillance operations and made numerous undercover purchases from Roseboro and Ramseur, according to the news release.

On Tuesday, March 3, ICSO personnel executed two search warrants in the City of Statesville as part of the investigation.

While conducting surveillance prior to executing the search warrants, investigators saw Ramseur arrive at 129 Garfield Street, the residence where Roseboro is staying, and enter the home.

After Ramseur left home, deputies performed a traffic stop on his vehicle and took him into custody, Campbell said.

A short time later, a search warrant was executed at 129 Garfield Street. During the search, investigators found crack cocaine and marijuana, along with other items consistent with the sale and distribution of controlled substances, according to the news release.

Throughout this investigation drugs valued at over $10,000 were seized by the ICSO Narcotics Investigations Unit, Campbell said.

Investigators also executed an additional search warrant at 1005 Rickert Street, the home Ramseur was staying in at the time.

All three suspects have prior drug convictions, according to the news release.

“The Iredell County Sheriff’s Office will actively target, and go after repeat offenders who continue to sell drugs on the streets of Iredell County,” Campbell said. “By selling drugs, they contribute to other crimes such as robbery, breaking and entering, and larcenies, which are committed by people who are addicted to these drugs so they can afford to buy the drugs. By removing these drug dealers from our community, we help everyone.”