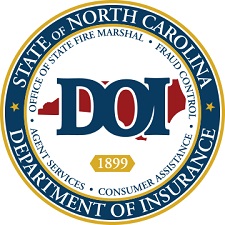 RALEIGH — The 4th of July is synonymous with barbecues, parades and fireworks. However, this year, many Independence Day celebrations could look differently due to the COVID-19 pandemic.

As a result of the coronavirus situation, many professional fireworks display shows have been canceled — but that does not mean people should have your own backyard fireworks show.

If fireworks are not handled properly, celebrations could end with a trip to the hospital.

Insurance Commissioner and State Fire Marshal Mike Causey is warning North Carolinians about the dangers of fireworks as they celebrate the upcoming holiday weekend.

“Many people think backyard fireworks are fun and that something dangerous will never happen. But that’s not the case,” Causey said. “Fireworks are illegal because they’re dangerous and very unpredictable. That’s why fireworks should only be used by licensed, trained professionals.”

According to the Consumer Product Safety Commission (CPSC), an average of 180 people go to the emergency room every day with fireworks-related injuries in the weeks before and after the July 4th holiday.

According to the North Carolina Injury & Violence Prevention Branch, there were 149 Emergency Department (ED) visits for firework-related injuries in 2019 in North Carolina. There were approximately five times as many ED visits among males (124 ED visits) as females (25 ED visits) for firework-related injuries. Rates peaked at 15-24 years of age among males and 0-4 years of age among females.

More than 9,000 people nationwide were treated for fireworks-related injuries in 2018, with 62 percent of them occurring during the month surrounding the Fourth of July (June 22-July 22). During that period, firecrackers were the number one cause of injuries, accounting for 19 percent of the estimated injuries. For children under 5 years of age, sparklers accounted for more than half of the total estimated injuries.

A simple, handheld sparkler can burn at a temperature of 1,200 degrees Fahrenheit. To put that into perspective, water boils at 212 degrees, a cake bakes at 350 degrees and wood burns at 575 degrees.
The best way to protect your family is to not use any fireworks at home. Instead, Causey urges all North Carolinians to attend public fireworks displays performed by trained professionals licensed by the state.

Insurance Commissioner and State Fire Marshal Mike Causey has released a video showing the dangers of fireworks to remind North Carolinians to leave the pyrotechnics to the professionals.