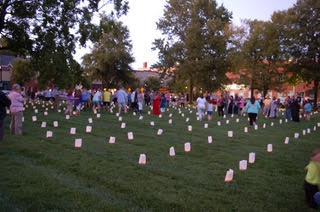 Over 350 Iredell County residents have lost their lives to a medication or drug overdose since 2008, according to Drug-Alcohol Coalition of Iredell (DACI) Director Jill McLelland. Hundreds more have experienced a non-fatal overdose. Both have had a devastating impact to their families and friends.

“You may have seen it. It has happened to people around you. Tomorrow, it could happen to someone you love,” McLelland said. “This is not an invisible issue.”

August 31 is International Overdose Awareness Day, part of a worldwide campaign to end overdoses and remember without stigma those who have died.

To raise awareness of this crisis, DACI will host its third annual Overdose Awareness Day Candlelight Vigil on Tuesday, August 31, from 7:30 to 8:30 p.m. at Liberty Park, located at 255 East Iredell Avenue in Mooresville.

This event will remember those lost, honor those who have survived, and acknowledge the grief of family and friends who have been affected by an overdose or overdose death.

Attendees are asked to bring photos or mementos of overdose victims to honor their memories. Speakers will share stories of their lost loved ones, and survivors of overdose will also speak.

A list of loved ones lost will be read and candles lit in their memory. Attendees can also make a pledge to work to end overdose incidents.

The event seeks to unite the community by recognizing loved ones’ grief, raising awareness of the overdose crisis, and offering hope for the future.

“This day provides an opportunity for us to reflect on practical ways to prevent overdose in our community,” said McLelland. “Overdose is preventable.”

“Knowing the real facts about drugs and what to do when you see someone experiencing an overdose does save lives. Overdose Day events that aim to educate our communities about drugs can really help.”

DACI will have free medication lockboxes, naloxone, and other materials available for attendees.

To have a a person lost to overdose remembered during the “Say Their Name” moment, email the person’s name, date of birth, and date of death to jill@daci.org.

To preorder a luminary in remembrance of a loved one lost to overdose, go to http://daciredell.org/wp-content/uploads/Luminary-Form-2021.pdf. Cost is $5, with proceeds going to fund next year’s event.

Attendees are asked to bring lawn chairs if they desire seating.

According to the initial data, overdoses jumped 30 percent from the previous year in 2020, according to the Centers for Disease Control. Officials believe the increase was driven by the prevalence of lethal fentanyl in street drugs as well as pandemic-related stress and difficulty in substance use disorder assistance.

The more than 93,000 people lost to overdose is the highest number ever recorded in a 12-month period, and the largest increase since at least 1999. These numbers are still considered provisional as some states have not finalized their reporting.

Ten states appear to have experienced at least a 40 percent rise in drug overdose deaths from 2019, according to the CDC data, including South Carolina, West Virginia, Tennessee, and Virginia.

People between the ages of 35 and 44 accounted for the highest number of deaths.

The provisional data does not break down race and ethnicity, but recent studies suggest the sharpest rise in overdose fatalities last year was among African-Americans. Even prior to the pandemic, overdose rates in Black communities rose more rapidly than among whites.