It was her last official day as director of operations and community partnerships for the United Way of Iredell County and her co-workers had planned a retirement reception at the Statesville Civic Center.

Burns was worried that nobody would come.

She need not have worried. When you’ve given your time and talent to help others for two decades, people generally show up to express their appreciation. 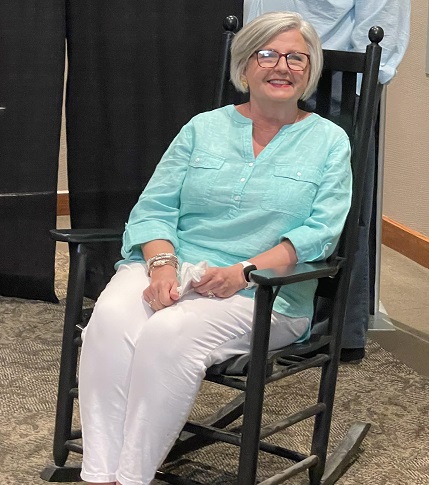 Burns’ send-off ceremony was attended by current and former civic and business leaders and representatives of several local nonprofit agencies. Dr. Ralph Bentley, Joan Scott and William Jones, all pillars of community involvement in their younger days, were among the attendees.

After years of working to help others, Burns found herself in the rare position of being the center of attention.

Sara Helmick, director of community engagement and foundation relations for the United Way, struggled to control her emotions as she talked about what Burns has meant to her.

Executive Director Brett Eckerman said that Burns’ “blood, sweat, tears and ideas” have been an integral part of everything the United Way has accomplished during his 10-year tenure.

The work of the United Way boils down to “the people counting on us to be there” in times of need, he explained. “That’s always been front and center for Liz.”

Eckerman recalled one day, years ago, when he and Burns were working alone in the old Davie Avenue office. “I remember hearing, ‘I’m just going to do it!’ coming over the cubicle wall,” he said.

In that instance, a family with a small child didn’t have enough food. The United Way does not generally provide direct services to residents, but that never stopped Burns — who personally delivered food to the family.

“You just make sure the job gets done,” Eckerman told Burns. “You’ve been a blessing.”

On other occasions, Burns delivered a box of food to an elderly woman who returned home to an empty refrigerator after a hospital stay. One of her last official deeds was connecting another woman with an agency that could provide money so she could keep the lights on.

Representatives of Matthew 25 Ministries, a food pantry in Harmony, and Rainbow Kidz, a grief program that serves children and teens throughout Iredell County, expressed their gratitude for Burns’ efforts.

“Rainbow Kidz would not be where it is without Liz and the United Way,” Director Leigh Ann Darty said. “I thank you from the bottom of my heart and the bottom of so many children’s hearts.”

Along with tributes to her commitment to helping others, there were also more than a couple of good-natured references to Burns’ prolific eye-rolls, and her friendly email reminders.

In honor of Burns’ semi-retirement — she will continue to work part time administering the United Way’s emergency food and shelter grant, the United Way presented her with a pair of rockers from Troutman Chair Co. Burns said she and her husband Jerry would put them to good use at their cabin in the Georgia mountains.

She will also given the honor of administering a small endowment — named the Burns Endowment in appreciation of her service to the United Way — aimed at helping those in crisis.

Those gifts — and the public recognition of her community service — touched Burns deeply.

“It has been a wonderful 20 years,” she said. “It means the world to me — the agencies, the volunteers. We do what we do to help people.”