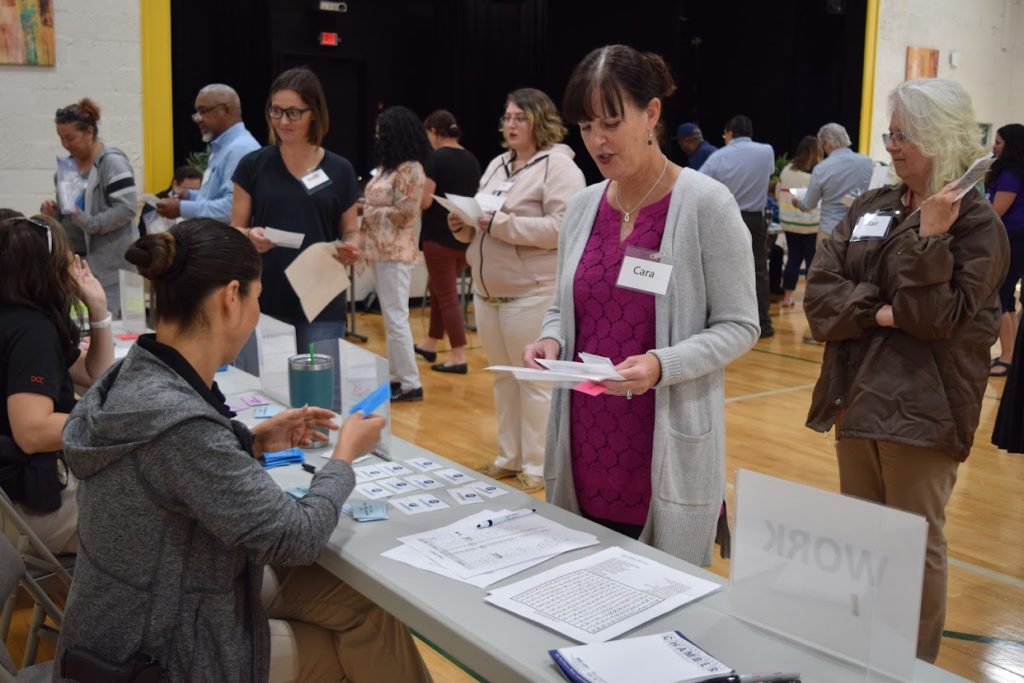 About 70 community, non-profit, and agency representatives took on new roles during a Prison to Community Re-entry Simulation, as they experienced life as recently released individuals trying to find jobs, housing, transportation, and medical care while also meeting probation requirements during their first month back in the community.

Donald Hicks, CFO of the Statesville Housing Authority, welcomed participants to the Unity Center, explaining that attendees were about to experience what 200 returning neighbors encounter as they acclimate back to the community after incarceration.

“If we can strengthen and embolden our existing systems to make re-entry transition work for those 200 individuals, could local officials not advocate state legislation for those saved dollars, a potential of $7 million for Iredell County alone?” Hicks said.

However, Hicks reminded the audience that these are real people, siblings, spouses, and children, and are more than just a cold statistic.

“My hope is that you receive these colorful strands of knowledge along the way and that you are able to weave them into the internal fabric of your being, altering your perspective and allowing you to become an advocate for these re-entering citizens and neighbors,” Hicks concluded.

Each participant had an assigned “character” with specific challenges and a criminal background, meager financial resources, and a “life” card that directed the tasks to be completed each week. Each station required a transportation ticket, with many also requiring identification documents (Social Security Card, Birth Certificate, State ID). 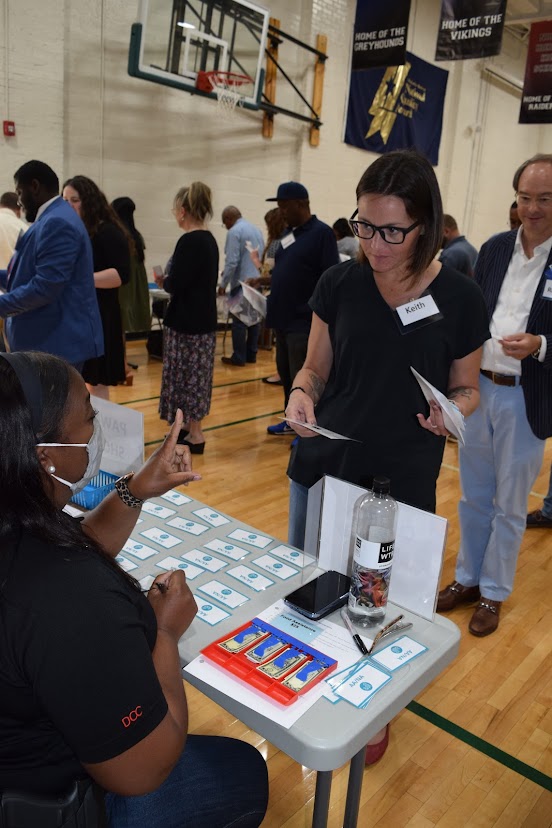 During the four 15-minute simulations representing one week’s tasks, participants discovered that their scant resources left them feeling frustrated, anxious, and harried as they sought to navigate stations to meet their various weekly needs, tried to find jobs and pay bills and child support, and attend required drug screens, support meetings, and counseling.

On top of these barriers, some stations threw them curves that set them off the path to self-reliance, including failed drug tests, new offenses, go to jail cards, getting removed from AA meetings for being under the influence or disruptive, and other challenging life events.

RE-ENTRY HELPS WITH TRANSITION TO COMMUNITY

Jennelle McCorkle, an N.C. Department of Public Safety Re-entry Officer, helps those about to be released from prison to prepare by securing their all-important Social Security card and birth certificates and creating a re-entry plan.

McCorkle takes these simulation experiences on the road around the state to promote community understanding and action, and marshal resources to remove some of the barriers that 94 percent of returning offenders face after their release. Seventy percent will be re-incarcerated because they cannot meet probation requirements or because they return to criminal activity to survive.

“They have no money in many cases, so they are starting from scratch. If they have something set up upon release, they will have more chances to succeed.”

McCorkle asked that participants keep their experiences in the simulation in mind as they return to their jobs. “Make your resources available if you believe in second chances. This is real life.”

“We need to look after our neighbors.”

Participants took that advice to heart during the simulation, lending each other money or bus cards, bailing others out of jail, or helping them with advice to make their tasks easier to complete.

Iredell County Health Department Director Jane Hinson found the simulation “stressful.” She was homeless for three weeks because she only made $120 per week in her part-time job and could not afford $400 rent. 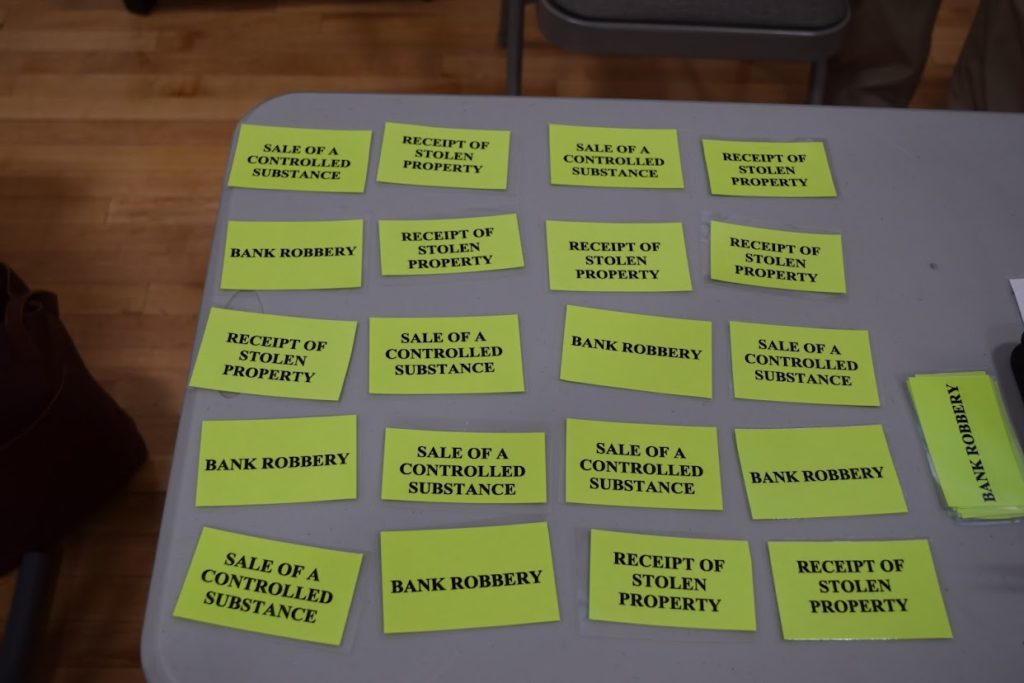 “The situation is setting people up to fail. It’s so difficult to meet requirements and expenses with a part-time job,” said Hinson.

Jesse Stroud with Southern Family Medicine said that the experience was “interesting and realistic. I can see the challenges.”

Stroud was frustrated with the job application process and saw that such forms might be hard for someone with a limited GED education.

Others saw the difficulty of holding down a full-time job while still keeping all the mandatory appointments.

After completing the simulation, only 10 participants felt they had been successful in their first re-entry month. McCorkle told participants that they needed to multiply their frustrations by 10 to match the real-world situation.

“You experienced not even a smidge of what they go through. Imagine if you have kids. Add a drug problem and mental health issues. You cannot even imagine.”

Too many return to selling drugs to survive and feed their families. “When are we going to stop this cycle?” McCorkle asked.

Malla Vue, District Director of Goodwill Industries of Northwest NC, recalled something that retired police officer Dan Miglin said to him: “Whether we like it or not, whether we are ready or not, justice-involved individuals are returning to Iredell County. If we don’t educate them and help them to success, the cycle of the revolving door will continue.”

Vue said that either these people will become productive citizens who earn a living or return to what they know — crime, which means more crime victims in the community. Because four in 10 offenders wind up back in prison, “we have to create opportunities for people to enhance their lives with work resources and other supports.” 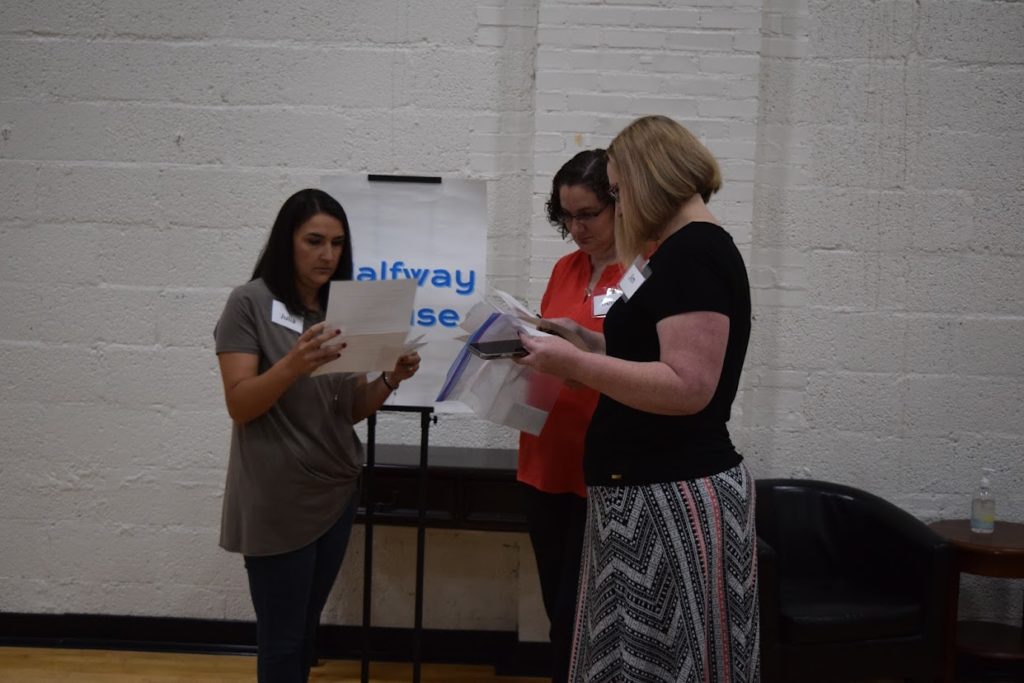 The group, eventually growing and becoming the Iredell County Reentry Initiative in early 2019, expanded to add a pre-release component to help those about to be released create a transition plan to acquire the tools for a successful reentry.

The group made contact with those re-entering the community within 24 hours of release to offer support, coaching, and help in implementing the skills and tools they had learned.

Their efforts have been successful, reducing the recidivism rate to 12 percent as the grant ended. Goodwill’s Reentry program then stepped in to coordinate the reentry efforts, with the current recidivism rate down to 10.7 percent.

Vue noted that the collaboration of all the community organizations is vital to continue to make progress. ”We reduce crime victims when we reduce recidivism. Law enforcement cannot do it alone — it takes non-profits, faith-based organizations, employers, the government, support services, and community leaders to make progress happen.”

“Iredell County is blessed with the resources it has, but we have to do more to collaborate, to identify needs, and to work collectively to address this issue and get people to services,” he said.

Atkins noted the Iredell County Reentry Initiative has made tremendous inroads to find opportunities to help. “We need to plug holes and fill gaps. We are a giving community who wants to help its neighbors,” he said.

Shannon Viera, executive director of the Greater Statesville Chamber of Commerce, noted her frustration and anxiety as she went through the process. “My heart was pounding and it was just a simulation. I cannot imagine really going through that.”

Viera said that employers are struggling to find workers, and they need to work on recruiting more employers who are willing to give those re-entering a chance to be in the workforce and be productive.

James Barnes of NC Works added that businesses that hire former offenders are eligible for $5,000 in bonding insurance to protect them from employee dishonesty or fraud for six months after hiring a justice-involved person.

A Work Opportunity Tax Credit also provides federal tax incentives of $2,400 to $9,600 for hiring a person with a felony conviction or within a year of the person’s release from prison. A 100-Day No Fault provision protects the employer if it terminates a new employee within the first 100 days because of an inability to do the work.

Pam Navey, chair of the Iredell Reentry Council, said the coalition was seeking state funds or grants and a chunk of the county’s opioid settlement money to help fund and redouble its local efforts, hampered the past few years by COVID-19 restrictions. 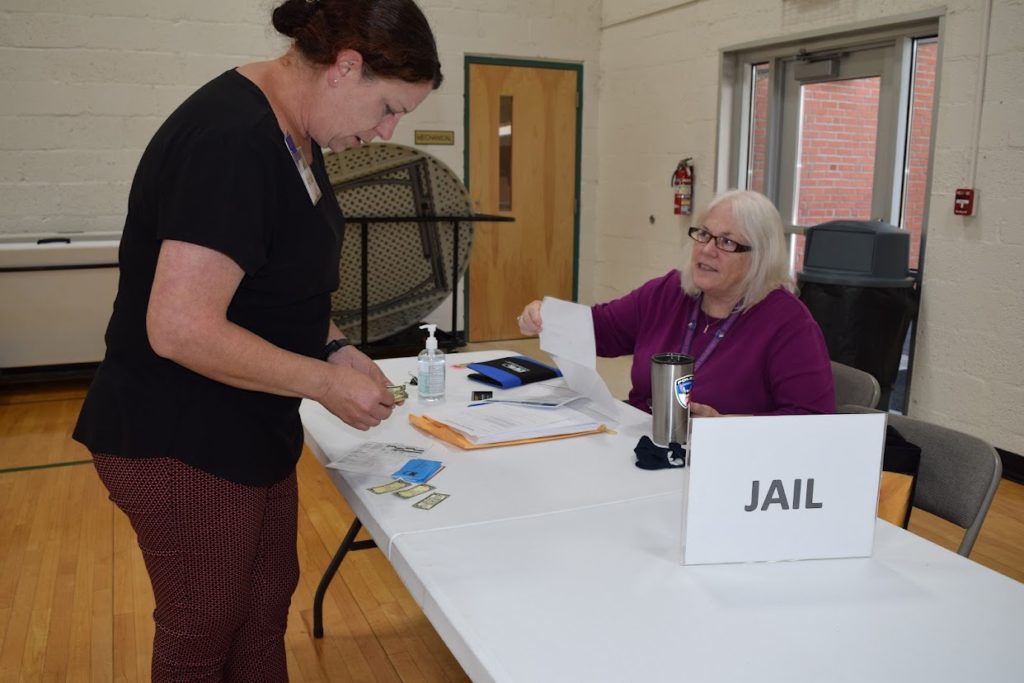 The group supported the opening of Christ Church’s Foundry House and recently assisted the Statesville Housing Authority and Fifth Street Ministry as SHA designated four apartments to house eight recently incarcerated people for up to a year, along with assistance and case management from many local agencies and non-profits.

“It’s not because of the LRC, but it is the working together of the partners coming to the table and working together to fill gaps if we do not have a program to serve offenders as they reenter,” said Navey.

Navey wants to pick up the council’s Sequential Intercept Model (SIM) analysis plans that were derailed by COVID-19 in April of 2020. A SIM analysis details how individuals with mental and substance use disorders come into contact with and move through the criminal justice system in a community.

The Substance Abuse and Mental Health Services Administration SIM model details five “intercepts,” one of which focuses on re-entry. This re-entry section of the diversion model focuses on providing “transition planning and support to people with mental and substance use disorders who are returning back to the community after incarceration in jail or prison.”

The model also helps to ensure people “have workable plans in place to provide seamless access to medication, treatment, housing, health care coverage, and services from the moment of release and throughout their reentry.”

The SIM analysis will examine specific aspects of Iredell County’s re-entry efforts and identify gaps in services that coalition members can help fill. The analysis will also help the Iredell LRC seek already allocated funds to meet these needs.

Navey, who has worked in re-entry efforts since 1994, hopes that elected officials, appointed directors, and division heads will get heavily involved in reentry efforts to support the many boots already on the ground in Iredell County.

Navey plans to build on the momentum of the simulation with a follow-up Zoom meeting in July through the Local Reentry Council. She was grateful to Department of Public Safety representatives and local sponsors and supporters for bringing this event to Statesville and for focusing attention to this important work.

Iredell-Statesville Schools provided the venue for the event. 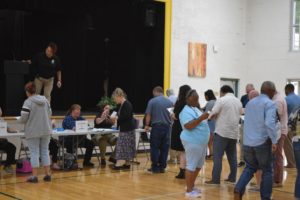 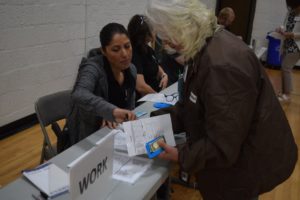 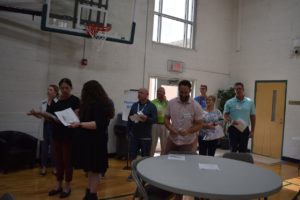 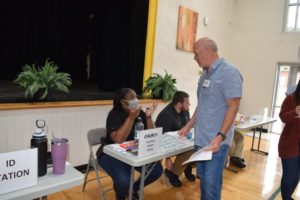 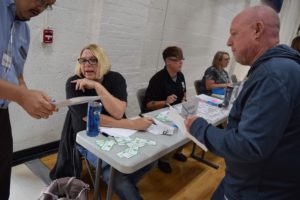 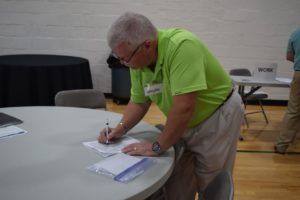 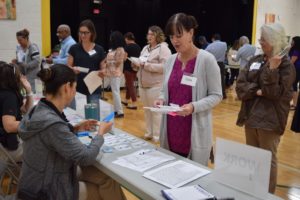 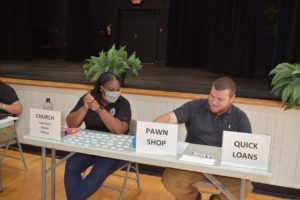 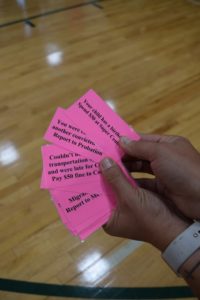 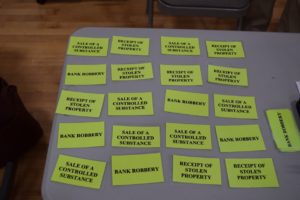 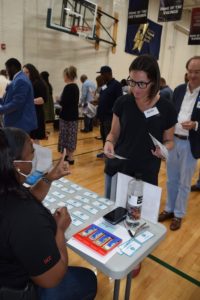 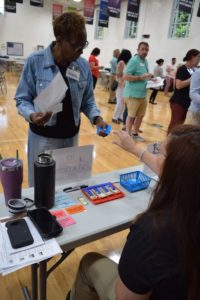 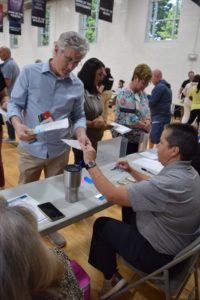 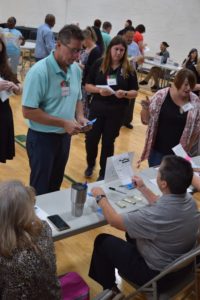 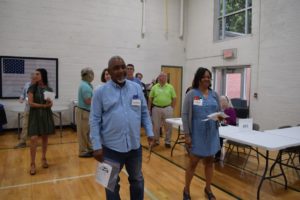 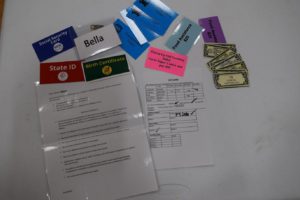