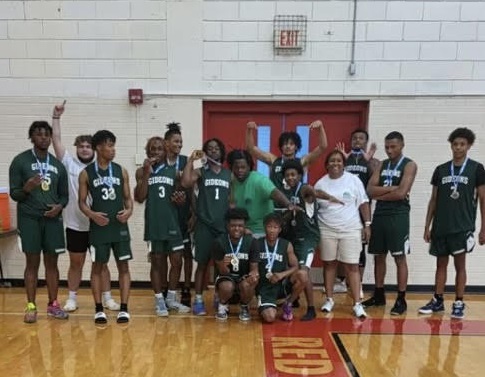 Sandra Donawa is more than just a coach.

She is a mentor to young men on and off the court for Hoops for Christ, an organization founded by Terry Sharpe and Barry Major in 2016 to build individuals up in Christ and to have fun while doing it.

Donawa, who began coaching in November for the organization, has more than seven years of experience coaching basketball. She she wants to make a difference in her players’ lives.

Over Memorial Day weekend, Hoops for Christ competed in a tournament in Hickory. Out of 15 high school teams, they placed first and qualified for nationals in Myrtle Beach in July.

“We went up to Hickory to the Great Smoky Shootout and went 6-1. I wasn’t expecting anything like that out of the young men,” she said. “We were just going to put up a good show. We won the whole senior division, so we were quite pleased with ourselves.”

Hoops for Christ provides a safe space for young men in ninth grade through college age. Donawa, who is assisted by team manager Demetrius Jean, sees potential in all of her players.

“I have several that deserve some basketball attention and they haven’t gotten it. We are hoping that this step that we are taking to get to nationals will help them,” she said.

Some of the players have faced adversity inside and outside of school. Basketball, she said, can help them push through the tough spots in their lives.

Landmark Church of Statesville is a sponsor of Hoops for Christ. They provided the team with uniforms and paid for their entry fee to the tournament in July.

From the smallest donation to the largest, Hoops for Christ appreciates any and all support. They are accepting donations via Cashapp at $SandraDonawa.

The donations will help ensure all of the players can compete at nationals without any financial worries.

“I appreciate everything from the bottom of my heart that these boys are doing and anything the community can do for us to help us get to nationals,” said Donawa.