The Mooresville Police Department is asking for assistance identifying a suspect in a theft investigation.

On February 20, MPD officers responded to a local business, where an employee reported her wallet had been stolen from her purse while she was working. After stealing the victim’s wallet, the suspect immediately went to another business in Mooresville and used the victim’s credit cards to make several unauthorized purchases, police said

Officers are now asking for the public’s assistance in identifying this suspect, who is described as being approximately 6-foot to 6-foot-2-inches tall with a slim build. The suspect also has tattoos on his neck and hands. 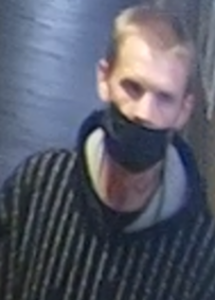