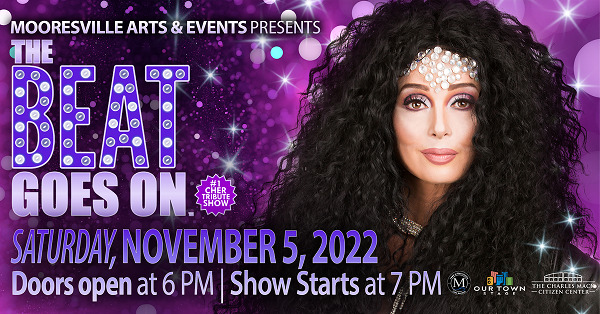 Town of Mooresville Arts & Events is excited to announce the Our Town Stage Indoor Concert Series will kick off this season with the exciting Vegas-style show, “The Beat Goes On — A Cher Tribute.”

The show will take place at the Joe V. Knox Auditorium in the Charles Mack Citizen Center, located at 215 N. Main Street in Mooresville, from 7 to 9 p.m. on Saturday, November 5. Doors will open at 6 p.m., and the show starts promptly at 7 p.m. Tickets range from $29 to $39.

The international touring show “The Beat Goes On” features American singer/actress Lisa McClowry’s portrayal of the Goddess of Pop in her one-woman, Broadway-style live stage show. McClowry is completely convincing as Cher, with every aspect of playing Cher down pat including her singing and speaking voice, the walk, the talk, the costumes, the makeup, and the mannerisms.

In addition, the show incorporates a live band, LED walls, video, multiple costume changes, dynamic dialogue, humor, and fun audience participation. Expect to hear Cher’s hits spanning from the 1960s to today, including “I Got You Babe,” “Gypsies Tramps and Thieves,” “I Found Someone,” “If I Could Turn Back Time,” as well as songs from ABBA, from Cher’s Dancing Queen album, Woman’s World, Welcome to Burlesque, Believe, and so much more!

McClowry is a life-long singer and entertainer with over 30 years in the entertainment industry as a trusted, reliable source and talent with 25 music albums, and multiple lead roles in theatrical productions, movies, and commercials. Her original music plays on the radio today.

The Beat Goes On — A Cher Tribute is the first show in the Our Town Stage Indoor Concert Series at the Charles Mack Citizen Center and will be followed by a lineup of four more shows. For more information shows or tickets, visit ourtownstage.com.