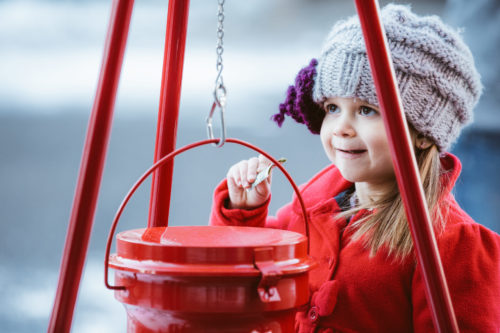 Everyone knows the sounds of the bell ringing at Christmas time; the Salvation Army Red Kettle fundraiser gives the every day person the chance to make a difference in the lives of local families all year long.

People come to the Salvation Army of Iredell County office with a variety of situations every day, requesting help to get through an emergency or family crisis. A death in a family has left them short of funds for their monthly expenses, a major car repair has drained their bank account, they’ve lost a job, and the list goes on and on.

Recently, a young couple came to the office with a small newborn. They requested help with emergency food because they had just taken in their niece. Apparently, the mother was in a state rehab program and was in danger of losing her baby to the authorities. The brother and his girlfriend decided to step up and raise this beautiful little girl until her mom was in better shape to do so. What a wonderful outcome to a terribly difficult situation!

Salvation Army of Iredell County Captain Joe Mure tells his bell ringers: “You never know what a smile will do for a person walking by” and “Whether someone can donate or not, everyone deserves a smile and a greeting.”

At one of Mure’s previous commands, he received an anonymous phone call one holiday season from a lady who shared that she was in the middle of a divorce and was contemplating suicide.

Fortunately, a greeting of “Merry Christmas” from one of his bell ringers snapped her back into reality, and she was able to focus on the meaning of the holiday and its significance in her life, what it meant to be alive, and to stay healthy for her family no matter the state of her marriage.

Looks can be completely deceiving; many people are highly stressed out and the holiday season carries with it a mixture of both joyful celebration and for some deep depression.

“Hopefully one of my workers can make a difference this year,” Mure said.

The bells ring for all kinds of people with a variety of hurts all year long. Please “Help Us Help Others” in 2022, Mure added.

Follow The Salvation Army of Iredell County on Facebook or find out more about giving or volunteering at SalvationArmyIredellCounty.org.