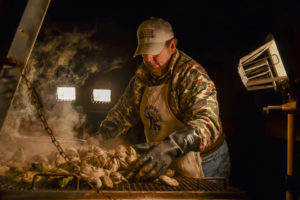 The Reverend Brad Mullis, rector of Trinity Episcopal Church, recently announced that Trinity’s 19th Annual Oyster Roast will be held on Friday, April 29, from 5:30 until 8 p.m. in the church Parrish Hall.

The public is invited to attend. Ticket prices are $55 per person in advance or $60 at the door.

The price includes, steamed oysters, Brunswick stew, salad, desserts, adult beverages, and soft drinks. Tickets can be purchased from the church by calling (704) 872-6314.

Each year the net proceeds from the Oyster Roast are donated to a charity. This year’s proceeds will be donated to the Boys & Girls Club of the Piedmont in Statesville, Mullis said.

Trinity Episcopal Church is located at 801 Henkel Road in Statesville.