Community members and agency partners joined together in Mooresville last week to raise awareness about the prevalence of domestic violence during the Iredell County Domestic Violence Task Force’s “Walk a Mile in Their Shoes” event.

Navey noted that “domestic violence is a very serious matter in our community and our county.” Though the crowd, mostly wearing the purple of domestic violence awareness, was few in number, “our goal is large.”

“We want to raise awareness that there is help in the community, help for victims in our community and the children.”

Lori Carlson, who has been Mooresville Police Department’s community resource coordinator for about a year, commented, “I never realized how much domestic violence impacts our community, and I want to thank our officers for being here.”

Emily Cowan, My Sister’s House victim advocate, announced the opening of a Mooresville office, staffed by McGill, which assists with safety planning, filing protective orders, and connecting survivors with resources within the community and the DA’s Office.

“We provide temporary shelter to victims who are fleeing domestic violence and who are in immediate danger. We also have individual and group therapy,” she said.

A new Mooresville domestic violence support group is starting on October 26. The group will allow participants to reflect and connect with others in similar circumstances, empower themselves and celebrate their strengths, practice essential tools for self-care, and explore ways to nurture healthy relationships.

To get involved in this free and confidential group, contact My Sister’s House at 704-872-3403. Free individual counseling is also available upon request.

Iredell DV Task Force Chairperson and DA Legal Assistant Robin Shea of the Iredell County DA’s Office explained how she assists survivors throughout the legal processes associated with domestic violence. After charges are filed, she provides a packet of information, explains the processes, and refers survivors to advocates and resources to get the help they need.

Cleaveland explained that the DA’s Office works closely with law enforcement and other agencies “from beginning to end” to assist survivors of domestic violence through the legal process to protect them from further harm.

Mooresville Police Department Sgt. Tim Taylor noted that in his 12 years on the force, he’s seen domestic violence in “every neighborhood, from million dollar homes to trailer parks, including males and females.”

Breaking the cycle of violence is the goal.

Navey reiterated that victims of domestic violence are both male and female, and the children who witness it are strongly affected as well. The goal of the Domestic Violence Task Force is to help survivors and children get help and resources as well as to get the perpetrators into counseling and treatment to break the cycle.

After the opening ceremony, the walkers moved north along Main Street from the Charles Mack Citizen Center and then crossed Main to march down to the Depot and then back to the start position, carrying signs and playing the song “Walk a Mile in Her Shoes.”

‘Walk a Mile in Their Shoes’ Photos 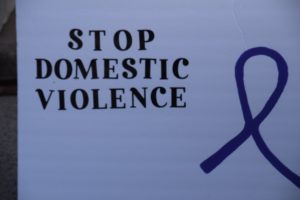 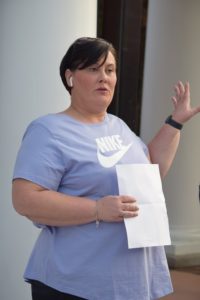 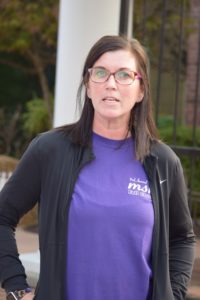 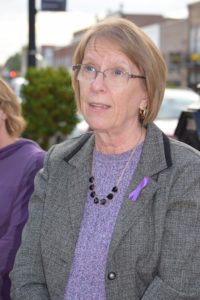 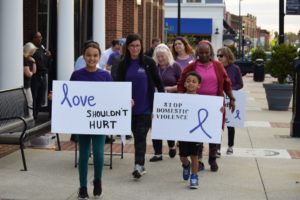 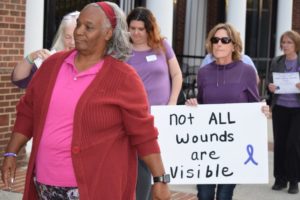 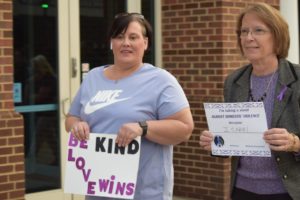 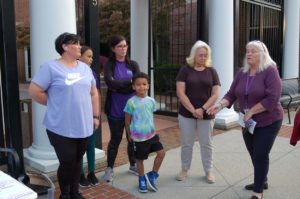 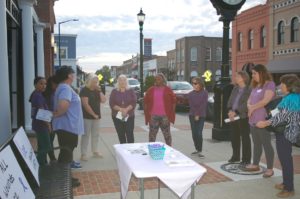 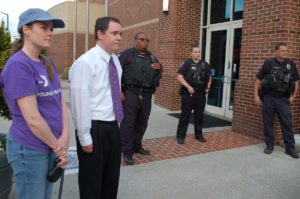 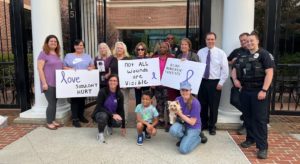 Carlson, the MPD, and Navey also worked together on the facilitation of the Domestic Violence Simulation, with the assistance of Cowan and Shea, that was attended by 31 people last week at the Iredell County Cooperative Extension Center.

Cowan told the group that My Sister’s House provided 3,740 nights for 130 women and children last year. The facility can serve up to 34 people and children in its eight bedrooms.

In 2020, 81.4 percent of all domestic violence incidents reported in Mooresville involved a female victim and male offender. Domestic violence is most common offense against women between the ages 18-24.

At the end of each potentially dangerous situation presented, the participants had to decide whether they will stay at home or move to one of the other locations available: hotel, relative or friend’s home, DV shelter, apartment, car, or homelessness.

If they leave, the decision may cost them either financially and/or emotionally. Each participant character had a random number of green cards to represent money and yellow cards representing goodwill and emotional support to spend.

Players experienced different costs for different options. When a participant/victim was out of the green or yellow cards required to enter their chosen location, they had to go home or choose homelessness.

At the end of the simulation, Navey asked those who chose to go home why they stayed or went back. Answers included children, pride, finances, fixed income, lack of job skills, pets, or age.

Others lacked outside support or believed they could make things better if they stayed. One was afraid the abuser would kill her if she left.

Players experienced a range of emotions while role-playing a domestic violence victim. Among those feelings were anger, embarrassment, hopelessness, frustration, helplessness, suicidal or homicidal thoughts, and guilt.

Others felt they were failed by the legal system or had too much responsibility for others. When Navey asked who in the group had thoughts of assault or harm toward their abuser, 99 percent of the hands went up.

The simulation session ended with a video that named the 28 North Carolina victims of homicide from the first six months of 2022, made by the son of a present DV survivor.

The victims’ ages ranged from 8 months to 79 years old, with most killed with firearms by their present or past spouses or partners. Two children were killed by a parent. 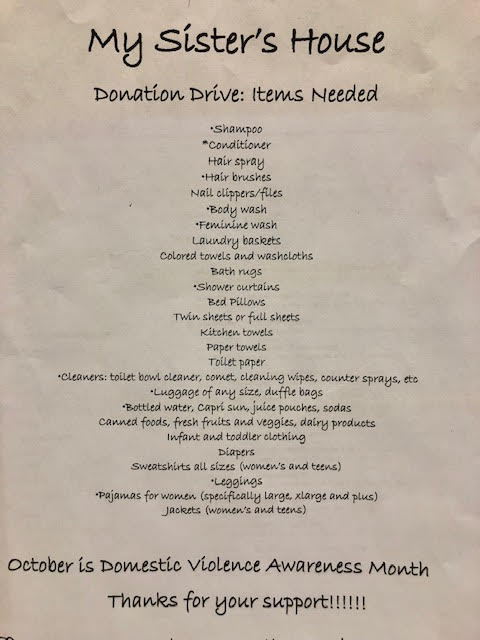