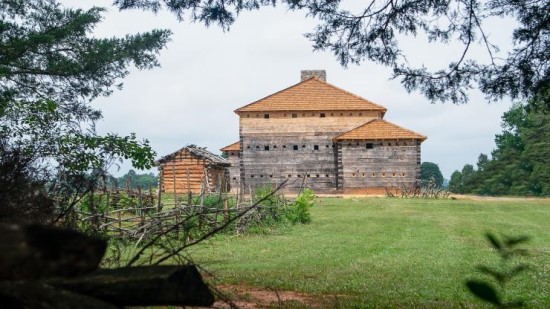 Visitors to the reconstructed Fort Dobbs will be able to experience daily life as it was in the 18th century on Saturday, December 10.

During the “Winter with the Western Company” event, costumed re-enactors representing colonial soldiers and settlers will bring the fort to life with on-going demonstrations including hearth cooking and wood working. Musket and cannon firing demonstrations will be held at 11 a.m., 1 p.m. and 3 p.m.

By December of 1756, Fort Dobbs was complete. Its garrison of 50 North Carolina soldiers prepared to spend the first of many winters in the building as they guarded the western edge of settlement in the British colony during the French and Indian War.

Fort Dobbs is a replica of the fort completed in 1756. Located at 438 Fort Dobbs Road in Statesville, it is open Tuesday-Saturday for timed tours of the fort for an age-based fee of $1 or $2. It is part of the Division of State Historic Sites within the N.C. Department of Natural and Cultural Resources.