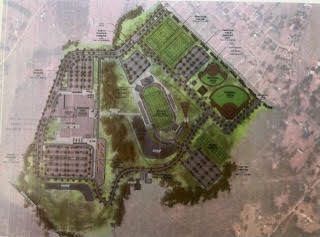 Iredell County commissioners and Iredell-Statesville Schools Board of Education members seem to be in agreement about the need to build Weathers Creek High School.

The sticking points are how to fund the project and whether it should be built at the planned site.

The new school, which is planned for property the school district purchased at 246 Overcash Road in Troutman, is projected to cost $170 million. That’s $90 million above the projected cost three years ago.

The school board and county commissioners met Tuesday afternoon to discuss the project and explore possible solutions for the funding shortfall.

The voters passed an $80 million bond referendum in March 2020, which included funding to pay for construction of the new high school. But construction costs have soared in the past two years, and the project is now expected to cost more than twice the original estimates.

One option to solve the funding gap is a public-private Partnership, known as P3. A private organization would help with the design of the building and create a “green” school that creates its own energy and power. Some of the costs could be offset by grant funding.

According to I-SS Chief of Facilities, Maintenance and Technology Tim Ivey, one of the benefits of the P3 model is that it allows the school to acquire a higher-end building for less money.

District officials have met with representatives of a P3 group, who said they would not redesign the district’s preliminary high school design. Additionally, the interest rate would be very low.

County Commissioner Brad Stroud asked if there were any school boards that have gone beyond a seven-year lease that now own their buildings.

Superintendent Jeff James said that he did not want to speak on behalf of the P3 organization but would like to facilitate a meeting in the future.

The second option that was discussed was relocating the new high school.

Board of Commissioners Vice Chairman Bert Connolly asked the school board if they could look at other sites for the new high school. He floated the idea of possibly building the new high school on the same campus as South Iredell High School.

Under that plan, the new school could share some of the same facilities, such as the Performing Arts building. He also mentioned that it would also put students in close proximity to the Career Academy and Technical School.

School officials said that it would create a traffic nightmare along with other issues.

Another option that was discussed during the meeting was building the high school with a phased-in approach. The school board quickly rejected that idea because it would put students in mega units and could also be disruptive to learning.

“Building a school in phases is an incomplete school,” School Board Vice Chairman Mike Kubiniec said.

School board member Anita Kurn said that she supports moving forward with the Weathers Creek High School at the current location.

“We have had 68 meetings and there’s been two county commissioners at those meetings,” Kurn said, suggesting there was no reason to be surprised.

County Commissioner Chair Melissa Neader responded: “I was there and I think the element of surprise was the economy.”

Kurn also said leaving the athletic fields out of the design would not be cost effective for site development in the long run and that the school will lose its sense of community.

“Sports are very important to kids that are in high school,” she said.

Another idea is to also look at a public-private partnership for athletics.

Kubiniec asked the county commissioners how much money is in the county’s fund balance. He wanted to know if some of the funds could be directed toward the new high school.

Mull explained that the Board of Commissioners has a policy that it will not drop below 18 percent of the annual general fund expense budget, which means the county has $27.6 million available.

“We’re trying to save for capital projects on the county’s Capital Improvement Plan,” she said.

Mull said that the county strives to pay for its facilities and buildings outright instead of financing them. With that said, the county opted to finance around $11 million a few year ago instead of increasing taxes to cover cost overruns on the new public safety center and jail.

School board member Charles Kelly asked the county commissioners if they would consider going back to voters to approve another bond package to make up the shortfall.

Some commissioners have expressed reservations about the fact that the voters approved an $80 million bond package in 2020, asserting that asking them for more money would be unfair. They also have concerns that it wouldn’t pass.

The county manager advised both boards that if commissioners put another bond on the ballot to fund the remaining difference and it failed, it could be detrimental to the school system.

“These two boards have to figure it out the right way. If it goes out to the voters and the voters say, ‘No, I’m not wanting to raise my taxes to pay for that overage,’ then the LGC (Local Government Commission) won’t allow us to borrow that money because the voters said no,” Mull said.

School board Chairman Bill Howell said that he felt the meeting was productive. It was encouraging that the boards were willing to work together and work towards solutions, he said.