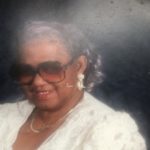 Mrs. Annie Marie Falls Fonseca, 85, of 111 Sweetwater Drive, Statesville, N.C., was born in Iredell County on January 15, 1934, and was the daughter of the late Robert Michael Falls and Gladys Marie Waddell Falls. She departed this life on Sunday, December 1, 2019, at the Gordon Hospice House following an extended illness.

She was preceded in death by two daughters, Tawanda Fonseca and Loretta Michelle Fonseca, and a brother, Ollie Lackey. She was married to Edward Fonseca, who survives, for over 57 years.

She attended Morningside High School and was employed by Flex Knit at one time as a Sewing Machine Operator. She was also known by many for her store, Mother Love’s Clothing Store. She was a member of New Life Missionary Baptist Church.

Celebration of Life Services will be conducted Thursday, December 5, 2019, at 1 p.m. at New Life Missionary Baptist Church. Reverend Ivan Cowan, Pastor will officiate. Mrs. Fonseca will remain at Rutledge and Bigham Funeral Home until taken to the church to lie in state at 11:30 a.m. Members of the family will receive from 12 until 1 p.m., but will assemble at the residence at other times.

Visit the Book of Memories for Mrs. Fonseca at www.rutledgeandbigham.com. Rutledge and Bigham Funeral Home is serving the family of Mrs. Annie Fonseca.