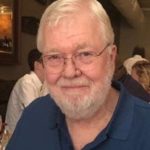 Glenn Edward Powers, “Papa”, 76, of Mooresville, N.C., was called to be with our Heavenly Father on Sunday, December 15, 2019, at Novant Health Huntersville Medical Center.

He was born on June 17, 1943 in Metter, Ga., to the late Estelle Vaughn Powers. Mr. Powers was a veteran and served in the Army National Guard. He was kind, generous, and took care of everyone before himself, and he was always willing to help. In his free time, Glenn loved to fish and enjoyed wood working. He built swings, sandboxes, and playhouses for his grandchildren. Glenn loved his family and spending time with his grandchildren. He taught them so much, especially farm life activities like riding horses, building barns, farming crops and how to simply enjoy nature.

In addition to his parents, he was preceded in death by half-brothers, Carl Deal and Leslie Deal.

A Memorial service will be held at a later date with close family and friends.

Cavin-Cook Funeral Home & Crematory, Mooresville, is serving the Powers family. Condolences may be made to the family at www.cavin-cook.com.