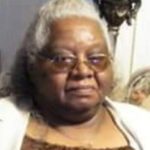 Ms. Linda Sue Smyre, 70, of 124 Carolina Wren, Mooresville, N.C., passed away on Saturday, December 28, 2019, at Novant Health Center in Winston-Salem following an extended illness. She was born in Iredell County on June 21, 1949, and was the daughter of the late John Wesley Smyre and Mary Louise Redmond Smyre.

In addition to her parents, she was preceded in death by her stepdaughters, Yonnah Daye and April Lawrence; a stepson, Kenny Lawrence; two brothers, Johnny Smyre and Donald Ray Smyre; and Herbie James; and a sister, Mary Lois Imes.

She attended Houstonville Elementary School and was a graduate of Unity High School and attended New Jerusalem Apostolic Church of Mocksville. Prior to her illness, she was employed by Aeroquip.

Members of the family will receive friends at the funeral home from 12 until 1 p.m., but will assemble at the residence of a daughter, Ruby Smyre, 174 N. Thomas Lane, Stony Point, N.C., at other times.

Visit the Book of Memories for Ms. Smyre at www.rutledgeandbigham.com.