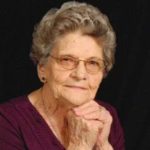 She was born on July 3, 1922, in Greenville, S.C., to the late Fred and Auggie Campbell Burrell. Mrs. Crisco was married to Walter Marshall Crisco, who preceded her in death.

She was a loving wife, mother, sister and grandmother. She retired from Canon Mills in Kannapolis and then worked briefly at Parker Hannifin. After her retirement, she enjoyed making quilts, doing ceramics and cooking.

She loved Jesus and was a member of First Baptist Church in Mooresville.

In addition to her husband, she was preceded in death by a daughter, Juanita Crisco; a grandson, Mike Crisco; a daughter-in-law, Barbara Crisco; sisters, Mamie Canupp and Mae Byars; brothers, Angus Burrell, Carlos Burrell, H.B. Burrell and Fred Burrell.

The family will receive friends on Wednesday, December 4, from 10 to 11 a.m. with a service following at 11 a.m. at Cavin-Cook Funeral Home Chapel. Burial will follow the service at Glenwood Memorial Park.

Cavin-Cook Funeral Home & Crematory, Mooresville, is serving the Crisco family. Condolences may be made to the family at www.cavin-cook.com.