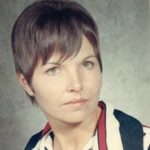 Peggy Wilhelm Carpenter, 80, of Mooresville, N.C., passed away on Friday, November 8, 2019, at Genesis Healthcare in Mooresville.

She was born on February 1, 1939, in Iredell County, N.C., to the late John and Grace Ervin Wilhelm. Mrs. Carpenter was a member of Centenary United Methodist Church in Mount Ulla.

The family will receive friends on Friday, November 15, from 11:30 a.m. to 1 p.m. with a service following at 1 p.m. at Cavin-Cook Funeral Home Chapel with Rev. Charles Hutchens officiating. Burial of cremated remains will be following the service at Glenwood Memorial Park.

Cavin-Cook Funeral Home and Crematory, Mooresville, is serving the Carpenter family. Condolences may be made to the family at www.cavin-cook.com.