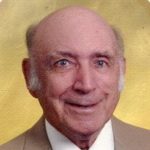 Mr. Victor Worth Crosby, 100, of Statesville, N.C., died Tuesday, December 10, 2019 at Autumn Care of Statesville. He was born May 1, 1919, in Hamilton County, Iowa, and was a son of the late William Herbert Crosby and Grace McConnell Crosby. He was preceded in death by his first wife, Ruth Carolyne Alexander Crosby.

Mr. Crosby was a retired farmer and enjoyed genealogy, travel, dancing and games.

Services celebrating Mr. Crosby’s life will be conducted at 2 p.m. on Sunday, December 15, 2019, at Nicholson Funeral Home with Rev. Jeremy Fox and Rev. Darren Johnson officiating. Burial will follow in Oakwood Cemetery. The family will greet friends from 12:45 to 1:45 p.m. prior to the service.

Fond memories and expressions of sympathy may be shared at www.nicholsonfunerals.com. Memorials may be given to the charity of the donor’s choice.