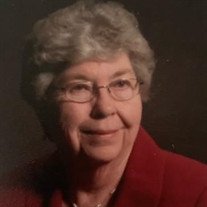 She was born October 10, 1933, in Statesville, and was the daughter of the late Foy R. Dagenhardt and Edna Shaver Dagenhardt Cox. She was preceded in death by her beloved husband of 68 years, Philmon E. Jones Sr., and her sister, Joreen Neumann.

Barbara was a lady of faith, an active member of Union Grove United Methodist Church. She taught Sunday School and was involved with the Methodist Women. She also was able to compile the history of the church and write a book to commemorate the legacy. Barbara painted figurines for Tom Clark, was able to sew drapes and numerous other items, knit and crochet. She was creative, crafty, organized and a strong woman who deeply loved her family.

A private funeral service will be held at Union Grove United Methodist Church and she will be laid to rest with her husband in the church cemetery.

Memorials may be made to Union Grove United Methodist Church or to the Union Grove UMC Veterans Community Market.