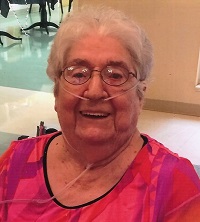 Mrs. Baldwin was born February 3, 1931, in Iredell County and was the daughter of the late Clarence Poole and Lucy Honeycutt Tester. She attended Statesville City Schools, worked in the home health profession and was married to the late George Baldwin.

In addition to her parents and husband, Betty was preceded in death by one son, Michael E. Lamb, and two brothers, John Tester and Jerry Poole.

Graveside funeral services will be held at 2 p.m. on Friday, December 4, 2020, at Oakwood Cemetery.
In lieu of flowers, memorials may be made to Hospice and Palliative Care of Iredell County.