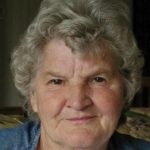 Charlcie was a graduate of Celeste Henkel School, was retired from Uniglass, and was a member of South River Baptist Church. She had a giving heart, which included giving things to others. She enjoyed talking on the phone, playing Bingo, watching TV, especially game shows, collecting gift cards and coupons to go out to eat. Charlcie loved roses, but more than anything, she loved her family, her church and her church family.

Fond memories and condolences may be left at www.nicholsonfunerals.com