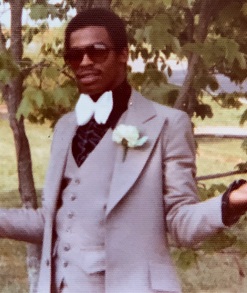 In addition to his parents, Frankie was preceded in death by his grandparents, Deacon Joe Roy and Eula Daniels, and Winford and Francis Tuttle; brother, James Earl Woods; several uncles; and a special aunt, Eloise Daniels.

Frankie had a great love for family and is survived by a devoted sister, Bonita (Larry) Napper; brothers Donnie Woods and Michael (Tammy) Woods; a loving niece, Tierra Parsons of Charlotte, N.C.; and nephew, Corey Nesbitt of Jacksonville, Fla.  Also surviving are loving and devoted friend, Diane Davidson of Statesville and a special cousin, John D. Daniels Jr. of Louisville, Ky., and a host of cousins, nieces, nephews, other relatives and friends.

Having never met a stranger, Frankie touched many lives with his humor and jovial spirit. He had a passion for music and was a founding member of the Original Gospel Crusaders.

Celebration of Life Services will be conducted Friday, July 3, 2020, at 3 p.m. at Rutledge and Bigham Funeral Home. Rev. Dr. Lonnie E. Gray will officiate and burial will in the St. Joseph Church Cemetery in Statesville.

There will be no public visitation. Unfortunately, with the COVID-19 virus, Rutledge and Bigham Funeral Home, along with other funeral homes across the country, has been issued a mandate to limit the number of family and/or friends at funeral services. You can only enter the funeral with a funeral pass, which will be given to the family.

Visit the Book of Memories for Frankie at www.rutledgeandbigham.com. Rutledge and Bigham Funeral Home is serving the Family.