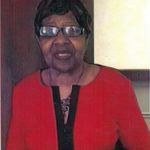 Georgia Ann White Turner, 77, of Statesville, N.C., was born in Iredell County on April 29, 1942, and was the daughter of the late Lex White and Annie Belle Redmon White. She departed this life on Friday, March 20, 2020, at Accordius Heath Care following an extended illness.

She attended Iredell County Schools and was a long-time member of Chestnut Grove Baptist Church. She was united in marriage to Harry “Pete” Turner, who preceded her in death. In addition to her husband and parents, she was also preceded in death by a brother, Melvin White.