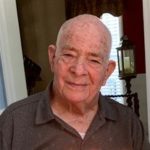 Holly Cedric Brown Jr., 86, of Davidson, N.C., peacefully passed away on February 23, 2020, at the Levine & Dickson Hospice House, while surrounded by his loved ones. He was born in Hawkinsville, Ga., to the late Holly Cedric “Cap” Brown Sr. and Ruth Carroll Brown on July 8, 1933. “Little Cap,” as he was known, was raised on his family’s farm with his two brothers and sister and graduated from Hawkinsville High School. Holly served his country in the Army and then went into law enforcement as a police officer. After 30 years of service, he retired as a sergeant for the Manatee County Sheriff’s Department in 1995. His passion and love of cars will be fondly remembered by family and friends. Holly was a gentle soul and loved to simply observe the world and events around him.

Holly is survived by his daughter and only child, Kathi Brown Bjork, and her husband Justin of Cornelius, N.C.; two grandchildren who were the light of his life, Abbigail Kathlyn Bjork and Jackson Lewis Brown Bjork; his sister, Betty Jean Koehen; two nieces and five nephews.

The family will receive friends on Saturday, February 29, from 1 to 2 p.m. with a graveside service following at 2 p.m. at Brown’s Cemetery in Midway, Ga.

Holly resided at William’s Place in Davidson, N.C., where he made many friends over the past three years. His family would like to especially thank Williams Place managers Dan and Debbie McEntire for their memorable companionship with Holly.

Special thanks to Home Carolina, whose loving care of Holly and support of his family is unforgettable and appreciated. The family also extends deepest gratitude to the Levine & Dickson Hospice House, who compassionately cared for Holly in his last days.