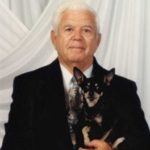 He was born on May 15, 1922, in Mooresville to the late Jay and Annie Thompson Howard. Mr. Howard served our country for 22 years in the U.S. Army and Air Force. He also saw service with the Navy, Marines, and Coast Guard. His duties took him to Panama, England, and France during WWII. He later served in the U.S., Japan, and Korea. During his military service, he earned many decorations, awards, and citations.

After military service, he worked in sales for a communication company in Charlotte. Marshall belonged and was active in the Central Methodist Church of Mooresville for most of his life until he transferred his membership to St. Mark’s Lutheran Church in Charlotte to be with his wife Helen. Marshall enjoyed traveling, woodworking, reading, and his stamp collection.

A private graveside service will be held at Triplett United Methodist Church Cemetery.

Cavin-Cook Funeral Home & Crematory, Mooresville, is serving the Howard family. Condolences may be made to the family at www.cavin-cook.com.