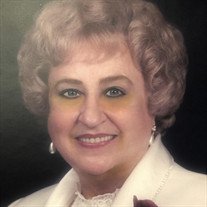 Mary Blanche Kennedy, 89, went to be with the Lord on September 17, 2020, at Davis Regional Medical Center in Statesville, N.C. She was born July 29, 1931, in Iredell County, N.C., the daughter of the late Dallas Brady “Dash” Gaither and Nettie Blackman Gaither. She was preceded in death by her beloved husband, Calvin Barber Kennedy.

Mary was a lady of faith who loved the Lord, sang gospel music and played the piano and organ for the church. She retired after a long career with Southern Bell Telephone Company as a dispatcher. Mary adored her family, enjoyed spending time in their company, and she was a devoted wife, mother, grandmother and friend who will be missed by all.

A funeral service will be held at 2 p.m. on Wednesday, September 23, 2020, at Nicholson Funeral Home, 135 E. Front Street, Statesville, NC 28677. The family will receive friends one hour prior to the service at the funeral home. Burial will follow at Iredell Memorial Gardens in Statesville, N.C.