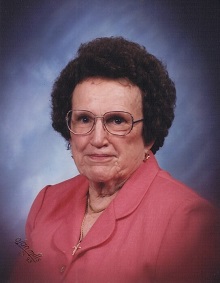 Mattie Elizabeth Gravely McHone, 91, of Statesville, N.C., passed away Thursday, September 24, 2020, in her home surrounded by her family.

Betty, as she was known by her family and friends, was born January 10, 1929, in Mount Airy, N.C., and was the daughter of the late Robert George Gravely and Nellie Irene Matthews Gravely.

She was a 1948 graduate of Mount Airy High School. On December 24, 1949, she married Grady Baxter McHone, who passed away on Oct. 19, 2015, after 66 years of marriage. In 1960 they moved to Statesville from Mount Airy so Grady could pursue more lucrative employment.

She was employed as stock clerk with Brenton Textiles (which became Jantzen and later Vanity Fair) for over 30 years. She enjoyed buying sweaters from the Jantzen Outlet for her family and friends that will continue to keep them warm for decades. After retirement, she and Grady got great joy traveling with family and friends to Disney World and the beaches of North Carolina and South Carolina. They never lost connection with their Mount Airy relatives and friends and spent many weekends and holidays with them there. At home in Statesville, they could be found in the evenings playing Rook with their best friends and longtime neighbors Russell and Billie Lockman. Betty and Billie also enjoyed going together to the beauty salon, shopping or to the library.

Betty’s grandchildren, Stephanie and Daniel, were always the joy of her life, and she always attended their sporting events, dance and music recitals, band concerts, and the Statesville Greyhound Marching Band performances at football games. She and Grady thoroughly enjoyed taking their grandchildren on their vacations. For the last three years her greatest joys were visits from her great-grandson Finn.

She was preceded in death by her parents; her brothers, Ralph Linwood Gravely and Paul Franklin Gravely; her nephew, Robert Kermit Gravely; and her niece, Sheila McHone Hawks.

The family wishes to express its sincere appreciation to the caregivers from Home Instead who have provided loving care to Betty for the last six years and to the staff of Hospice and Palliative Care of Iredell County for care provided during the last weeks of her life.

A graveside service at Oakwood Cemetery to honor Betty’s life will be held on Wednesday, September, 30, at 2 p.m. with the Rev. Christopher Fitzgerald officiating. Due to COVID-19, for the protection of all, the family asks everyone to please wear masks and practice social distancing.