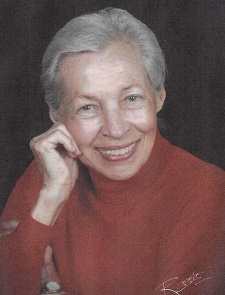 With great sadness, the family of Maxine Middlesworth mourns her death on September 4, 2020. Her 89 years were filled with a unique sense of optimism and service to others.

Mary Maxine Middlesworth was born in Detroit, Mich., on October 18, 1930, the daughter of William Dyla and Ruth Versen. She later was adopted by Mary and Bernard Steimel of Suttons Bay, Mich., where she spent her early school years before moving back to Detroit.

She graduated from Cass Technical High School and earned a degree in Medical Technology from Wayne State University. She was first employed by The Pima County Hospital lab in Tucson, Ariz., where she met her future husband, Chester Middlesworth, who was stationed at the Air Force base there during the Korean War.

Maxine married in 1953 and is the mother of three sons, John Paul, Scott, and Mark Middlesworth. She also has seven grandchildren: Harris, Lydia, Ryan, Mary, McCoy, Maxine, and Miriam.

In 1934, Lt. Middlesworth was reassigned to the 3rd Air Division Headquarters on the island of Guam. Maxine joined him there and worked for the U.S. Navy, testing water in the jungle streams across the island. The couple lived in a small house in the native village.

In 1955, then-Capt. Middlesworth was reassigned to Strategic Air Command in Omaha, Nebraska. Maxine worked at the local hospital.

Returning to Statesville in June 1956 after completing military service, the couple purchased a home in the Loray community and continued to live there for over half a century. Maxine began working in the lab and teaching at the School of Nursing at Davis Hospital and continued working there for the next 46 years.

Her activities as a school volunteer and tutor led to her serving on the Iredell County Board of Education for four straight terms (16 years). She established a permanent fund for teachers to develop new projects, which still remains active and growing to this day.

A member of Wesley Memorial United Methodist Church for almost 65 years, she served as Missions Chair for 25 years, was president of Methodist Women and was a Sunday School teacher.

Maxine was named Citizen of the Year by the Greater Statesville Chamber of Commerce. She loved to travel, especially with many of her good friends, including Reid and Peggy Gray, Dot and Hassel Reep, and Joe and Virginia Evans, and others, who joined Chester and her on their trips to many countries overseas and many areas of North and South America.

Maxine’s love for all animals, but especially birds and dogs, was well known. For many years she fostered hundreds of dogs who were up for adoption, though many became permanent residents at her home. She was an active volunteer for many local organizations, including Habitat for Humanity, American Red Cross, Meals on Wheels and many others.

The Middlesworth family would like to express their overwhelming thanks to the Iredell Memorial Hospital ICU staff of doctors and nurses who gave Maxine so much love and compassion during her recent battle with coronavirus and to the wonderful, most loving staff at Brookdale Senior Living for their many acts of comforting and love during the almost three years she lived there. All of these wonderful people are truly “Angels of Mercy.” We also thank Iredell County Hospice for the final days of comfort for Maxine. They are angels also!

A small private memorial service is planned. The family hopes to organize a tribute to Maxine next year where those who were touched by her remarkable life can gather and share memories and hug each other.