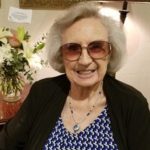 She was born on March 30, 1928, in Mooresville, N.C., to the late Andrew and Annie Morrow Stewart. Mrs. Mills was a Marketing Research Analyst for Celenase Corporation and was owner and operator of Kawasaki and John Deere of Charlotte. She was a member of Matthews United Methodist Church in Matthews. She was a loving and cherished mother, grandmother; and great grandmother.

In addition to her parents, she was preceded in death by her husband, George Robert Mills; daughter, Sharon “Sherry” Bradel; sisters, Marguerite Saksa and Merle Treadwell; brothers, Lewis A. Stewart and Harold G. Stewart; and granddaughter, Kaelen Russell.

The family will receive friends on Thursday, September 3, from 3 to 4 p.m. with a service following at 4 p.m. at Cavin-Cook Funeral Home Chapel with Rev. David Childers officiating. Burial will follow the service at Glenwood Memorial Park.

In lieu of flowers, memorials may be made to Billy Graham Evangelistic Association, 1 Billy Graham Parkway, Charlotte, NC 28201.

Cavin-Cook Funeral Home & Crematory, Mooresville, is serving the Mills family. Condolences may be made to the family at www.cavin-cook.com.