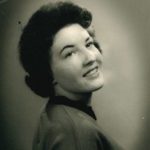 She was born on January 25, 1937, in Iron Station, N.C., to the late Jacob and Lucille Ewing Michael. Mrs. Hartley graduated from Lincolnton High School, where she excelled in basketball and was later inducted into the Lincolnton Sports Hall of Fame. She loved animals and spending time with her family.

In addition to her parents, she was preceded in death by her husbands, Tommy Lee McNeill Jr. and Dwight Blan Hartley; and brothers, Jack, Jim, and Charles Michael.

The family will receive friends on Friday, June 19, from 1 to 2 p.m. with a service following at 2 p.m. at Cavin-Cook Funeral Home Chapel with Rev. Sammy Pierce officiating. Burial will follow the service at Asbury United Methodist Church Cemetery in Lincolnton.

Cavin-Cook Funeral Home & Crematory, Mooresville, is serving the Hartley family. Condolences may be made to the family at www.cavin-cook.com.