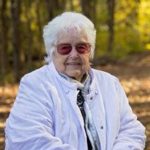 She was born on August 6, 1927, in Chazy, N.Y., to the late Leonard and Lillian Perrea Wells. Mrs. Osterhoudt worked at the K&W Cafeteria in Cornelius, N.C.

Before moving to North Carolina, Yvonne lived the majority of her life in Upstate New York. There she worked as a secretary for Paquette Insurance alongside Mary Morelli and Larry Paquette.

In addition to her parents, she was preceded in death by brothers, Orville Wells, Hubert Wells, and Joe Wells; and sisters, Betty Leduc and Elricka Varin; along with brothers-in-law Alton Garrand and Isidore Barie; and infant son, Russell Ricci.

The family will receive friends on Tuesday, July 28, from 10 to 11 a.m. with a service following at 11 a.m. at Trinity Baptist Church with Dr. Mark E. Harris officiating. Burial will follow the service at Glenwood Memorial Park.

In lieu of flowers, memorials may be made to ASPCA, www.aspca.org.

Cavin-Cook Funeral Home & Crematory, Mooresville, is serving the family of Ms. Osterhoudt. Condolences may be made to the family at www.cavin-cook.com.