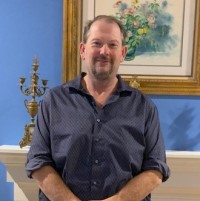 Brad was born June 15, 1967 in Iredell County and is the son of Donald J. Koepnick and Peggy Cunningham Koepnick of Statesville. He was a graduate of Statesville High School and attended Catawba Valley Community College in Hickory. He was an Estimator/Project Manager for Cityscape Roofing.

He was a loving and devoted son and father, and his pride and joy in life was his daughter Mia. He was friendly and thoughtful to everyone and had many friends. He lived his life guided by Christian principles.

In addition to his parents, left to cherish his memory are his daughter, Mia Patterson of Statesville; one sister, Gail Neal of Harmony; two nieces, Amber Neal, Anna Neal; one nephew, Brandon Neal; and numerous aunts, uncles and cousins.

Funeral services will be held at First Baptist Church, Davie Avenue in Statesville, on Thursday, February 25, at 11 a.m. with burial to follow in Oakwood Cemetery. Visitation will be Wednesday, February 24, at Troutman Funeral Home from 6 to 8 p.m.

Memorials may be made to The Children’s Homes of Iredell County, P.O. Box 451, Statesville, NC 28687 Online condolences may be made to the family at www.troutmanfuneralhome.com.