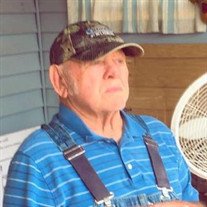 James “Jim” Richard Bell, 86, of Taylorsville, N.C., passed away at his home on Thursday, March 11, 2021. He was born Thursday, December 27, 1934, in Cleveland County to the late Robert Marcus Bell and Pearly Mae McGinnis Bell. He retired from Broyhill Furniture as a Master Mechanic Technician.

In addition to his parents, Jim was preceded in death by three brothers, Bob, Kenneth, and Butch Bell; and one sister, Trudy Bumgarner.

A Graveside Service will be conducted at 2 p.m. on Sunday, March 14, 2021, in the Stony Point Cemetery. Mr. Chanler Watts will officiate. The body will lie instate from 2 to 6 p.m. on Saturday, March 13, 2021, at Chapman Funeral Home. All Covid-19 CDC guidelines will be strictly observed.

Chapman Funeral Home is honored to be serving the family of James Richard Bell.