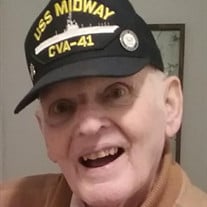 John William “Bill” Marshall passed away peaceful at Lake Norman Regional Medical Center on August 12, 2021. He was 85 years young. Born in Ohio, he was the son of the late John Paul Marshall and Nola Mione Shaw.

Growing up as a child, he loved to shoot the rifle, go hunting and working with model planes. As he grew older, he got into scuba diving, sky diving and boating. He enjoyed watching Westerns. Bill joined the military in 1954. He proudly served his country during the Vietnam War aboard the USS Midway. He started out as a Parachute Rigger and eventually retired as a Chief in 1984.

His favorite hymn was “In the Garden.” His belief in God and family made him the strongest man his family knew.

A graveside inurnment, with full military honors, will be held at a later date at Arlington National Cemetery.

Cavin-Cook Funeral Home and Crematory, Mooresville, N.C., is serving the Marshall family. Condolences may be sent to the family at www.cavin-cook.com.