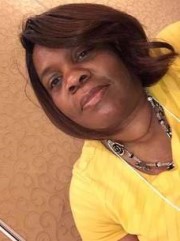 Ms. Julia Florea Stokes, 59, of 828 Phillips Lane, Statesville, N.C., passed away at Forsyth Medical Center in Winston-Salem, N.C., on Wednesday, October 6, 2021, following an extended illness. She was born in Brooklyn, N.Y. on November 23, 1961, and was the daughter of the late Zacharia Taylor Stokes and Eileen Estelle Joseph Stokes. In addition to her parents, she was preceded in death by a daughter, Courtney Nicole Stokes, and a sister, Sandra Pierre.

She was a graduate of Thomas Jefferson High School in Brooklyn, N.Y., and prior to her illness, she was employed by Jackson Hewitt as a tax preparer. She was a member of Christian Outreach of the Piedmont.

Celebration of Life Services will be conducted Saturday, October 16, 2021, at 1 p.m. Pastor Glen Usry will officiate and burial will follow in the Oakwood Cemetery in Statesville, N.C.

Visit the Book of Memories for Ms. Stokes at www.rutledgeandbigham.com.