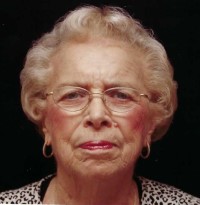 Mrs. Mary Starrette Warren passed away with her family at her side on February 23, 2021, at the age of 100. She was born in Iredell County, N.C., to Noah and Ellen Starrette. She had two older brothers and a younger sister. She graduated from Cool Spring High School. She lived most of her life on Salisbury Road and the last seven years at Morningside Assisted living in Gastonia, N.C.. On September 28, 1940, she married her lifelong love, Ray B. Warren. They shared 62 years together until his death on August 24, 2003.

She worked for Iredell County Schools for 17 years, then JC Penney for 30 years, including the last 20 years as catalog manager. She became a member of St. Paul’s Lutheran Church after she met her husband. At the church, she taught Sunday school, sang in the choir, was active in WELCA and a council member. After retiring, she and her husband spent time traveling and being with grandchildren. They managed to visit 49 of the 50 states.

In addition to her parents and husband, she was preceded in death by two brothers, Harold L. Starrette and William H. Starrette; and sister, Evelyn S. McCoy.

One of the things she wanted to be remembered for is her love. She loved her Lord, Family, church friends and fellow employees. One of her favorite scriptures was 1st Corinthians 13: “The greatest of these is love.”

Funeral Service will be at St. Paul’s Lutheran Church on Monday March 1, 2021, at 11 a.m. Visitors will be asked to wear masks and observe the virus distance rules.

The burial will be private at a later date.