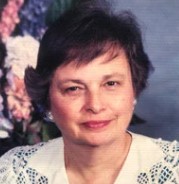 Patricia Jane Morrison, 81, of Mooresville, N.C., passed away on Wednesday, January 20, 2021, at the Citadel of Mooresville. She was born on August 9, 1939 in Mooresville to Lucy Corriher Christie and Harvey Christie.

Mrs. Morrison was retired from Draymore Manufacturing after over 30 years. She was a long-time member of the Women of the Moose at the Mooresville Moose Lodge. She was also a member of St. Mark’s Lutheran Church in Mooresville. Mrs. Morrison was a huge Dale Earnhardt fan and enjoyed collecting thimbles. She loved her family, especially her grandchildren and her fur baby, Patty.

In addition to her parents, she was preceded in death by her husband, Robert L. Morrison Jr.; sisters, Ruby Edmiston, Betty Saunders, and Lena Freeland; and brothers, Bobby, Joe, Tom, and Carl Christie.

The family will receive friends on Saturday, January 23, from 1 to 2 p.m. with a service following at 2 p.m. at Cavin-Cook Funeral Home Chapel. Burial will follow the service at Willow Valley Cemetery, Mooresville. In lieu of flowers, memorials may be made to the Serenity House, Attn: Rochelle Dearman, 110 Centre Church Road Mooresville, NC 28117.

Cavin-Cook Funeral Home & Crematory, Mooresville, is serving the Morrison family. Condolences may be made to the family at www.cavin-cook.com.