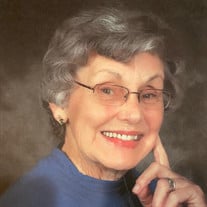 Rhoda Russell Calloway of Salisbury, N.C., passed away on Wednesday, December 15, 2021, at Trinity Oaks. Born January 25, 1927, in Albemarle, N.C., she was the daughter of the late James Koke Russell and Maggie Lowder Russell. She had four brothers and two sisters, all deceased.

Educated in Albemarle city schools, Rhoda received a B.A. degree in Business Education and was employed by Wiscasset Mills, Albemarle, and Southern Fasteners, Statesville. She was a member of New Salem UMC in Statesville for many years, where she was active in the UM women’s group and taught Sunday school there. After moving to Salisbury in 2017, she became a member of First UMC in Salisbury. Rhoda was an Iredell County Master Gardener and an avid photographer.

A Memorial Service will be held Saturday, December 18, 2021, at 11 a.m. at First UMC in Salisbury. The family will visit with friends following the service.

Memorials may be made to New Salem UMC, 155 New Salem Road, Statesville, NC 28625. Online condolences may be left at www.nicholsonfunerals.com.

Nicholson Funeral Home in Statesville is serving the family of Mrs. Calloway.