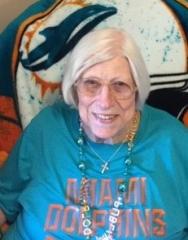 Ruth Emma Feimster Fox Welshans, 90, of Statesville, N.C., passed away on September 15, 2021, at Maple Leaf Health Care after a period of declining health.

She was born in Iredell County on March 20, 1931, to the late Norris William Feimster and Aileen Current Feimster. She graduated from Harmony High School in 1949 and later moved to Hialeah, Fla., and was a homemaker while raising five children. She eventually returned to reside in North Carolina later in her life. She enjoyed spending time with her family and friends and loved attending the Annual Feimster Family Reunion in Harmony. She loved celebrating holidays and her outfits had to match from head to toe. Ruth was a huge Miami Dolphins Fan.

In addition to her parents, she was preceded in death by her son, Donald “Donnie” Lee Fox Jr.; three brothers, Dent (Elaine) Feimster, Jimmy Feimster, and Dwight (Mary) Feimster. Ruth was the last living sibling.

She is further survived by a sister-in-law, Gretna Feimster of Harmony; brother and sister-in-laws, Robert and Barbara Fox of Clemmons; and many special nieces and nephews.

A Graveside service and burial will be held at 11 a.m. on Saturday, September 18, at Harmony Town Cemetery in Harmony, N.C., with Beth Carter officiating. The family will visit with friends following the service.

The family expresses sincere appreciation to the staff of Maple Leaf Health Care for their loving care they provided to Ruth since May 2019, especially Sarah, Iris, and Becky who became like family to them. Also, the family appreciates the staff at The Gardens of Statesville, where Ruth previously resided and called it “home”.