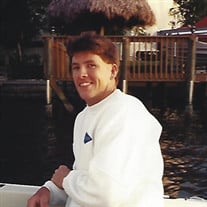 Stephen Edward McKeown, 57, of Mooresville, N.C., ran through the gates of Heaven on Saturday, June 5, 2021, in the comfort of his home with his loving family and friends surrounding him. He died at the age of 57 from a rare neurodegenerative disease, Multiple System Atrophy, which only affects 10,000 people in the U.S. per year. God knew he was strong enough to take on this horrific illness, and he welcomed this suffering with open arms.

He was born January 11, 1964, in Wayne, Mich., and was a son of the late Joseph Thomas McKeown and Ellinette Jean Baldwin.

Stephen retired as a Master Sergeant in the United States Air Force after 22 years of service. He then worked as an MRI Technician at Carolinas Medical Center. His ultimate job on this earth was to spread the message of Jesus and he did so every day. We believe that if his passing helps anyone find the Lord then it was not in vain. He is now perfect.

In addition to his parents, he was preceded in death by his mother-in-law, Carolyn Dewey; and his step father-in-law, Chuck Dewey.

Services celebrating Mr. McKeown’s life will be conducted at 3 p.m. on Friday at Nicholson Funeral Home. The service will be live streamed through the link on the funeral home website. The family will greet friends following the service. He will be laid to rest at the National Cemetery in Salisbury following a private ceremony with military rites.

Condolences may be sent online to the family to www.nicholsonfunerals.com. Memorials may be given to Newsong Church, 10308 Bailey Road, Unit 415, Cornelius, NC 28031.