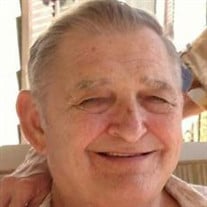 Mr. Wayne Frederick VanDyke, 78, of Statesville, N.C., passed away on Monday, October 4, 2021, at the Maple Leaf Healthcare after a brief illness.

Wayne was born in Ann Arbor, Mich., on March 28, 1943, and was the son of the late Frederick Laroy VanDyke and Kathryn Frances Hamilton VanDyke. His family moved to Niles, Mich., when he was a young boy, and he attended elementary and graduated from high school in Niles.

On September 2, 1967, he married Shirley Ann Payton VanDyke and together they shared 54 years of marriage before his passing.

Wayne worked for Clark equipment for 31 years. He relocated from Michigan on August 1, 1982, when Clark moved to Statesville, N.C.

Wayne liked to go to area flea markets just to see what he could find. He was an avid reader and enjoyed reading books about the western days as well as watching western movies. Wayne also enjoyed watching a variety of different sporting events but the most enjoyment came from watching wrestling.

Wayne was preceded in death by his parents; a sister, Mary Lou VanDyke; and stepdaughter, Terry Lawson.

In addition to his wife Shirley, Wayne is survived by one daughter, Patricia Roberts (Rodney) of Hiddenite; and two stepsons, Jeffrey Buck and Rodney Buck, both of Elkhart, Ind. He is also survived by eight grandchildren, Kati Flory of Marysville, Calif., Jenna Roberts of Hiddenite, Gwen Browning and Jessica Cash, both of Statesville, and Bradley, Kyle, Emily, and Kelly Buck, all of Elkhart, Ind.

At the request of Wayne, there will be no services.

Nicholson Funeral Home is serving the family of Wayne VanDyke.