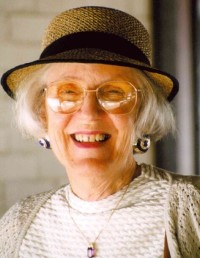 Born December 27, 1933, in Salinas, Calif., she was the daughter of the late Ernest and Clara Little Hunsucker.

She grew up in San Francisco and went to San Jose State University, where she was a member of Delta Zeta sorority. She was the Vice President of the Wells Fargo Library until her retirement. She loved to travel; her trip to Europe by train was one of her all-time favorites.

In Statesville, N.C., she was a member of Trinity Episcopal Church, Daughters of the American Revolution, and the Red Hat Society.

She was preceded in death by her mother, father, and beloved sister and brother-in-law, Ruth and Edward Scanzio. Also preceding her were her grandparents, Charles and Georgie Little and Thomas and Amanda Hunsucker, all of Conover, N.C.

She is survived by her niece, Victoria Holland (Jeffrey), and their daughters Angela (fiancé Cameron McMillan) and Samantha, and nephew Edward Scanzio.

A memorial service will be held at 11 a.m. on Thursday, May 5, 2022, at Troutman Funeral Home Chapel. The family will visit with friends from 10 to 11 a.m. prior to the service. A private burial will be held at a later date.

Memorials may be made to Trinity Episcopal Church of Statesville, the Juvenile Diabetes Research Foundation, or the charity of your choice.