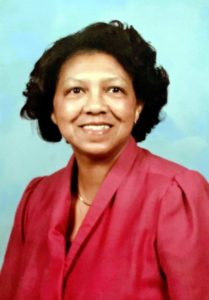 Mrs. Bessie Geraldine Reid, 82, of 1592 West Cloaninger Avenue, Statesville, N.C., passed from this life at her home unexpectedly on Monday, March 14, 2022. She was born November 6, 1939, to the late Lester and Eleanor Watts Millsaps Sr.

Mrs. Bessie Geraldine Reid was a graduate of Happy Plains High School in Taylorsville, N.C. She made history as she was among the first group of women to be employed by N L Fasteners (Southern Screw) in Statesville. After N L Fasteners, she was employed by Hoechst Celanese in Salisbury, N.C., and worked there until her retirement.

Mrs. Reid had many passions— among which she was an excellent seamstress, phenomenal cook, cake decorator and interior designer. She enjoyed serving on the hospitality ministry at Zion Chapel, where she served in the kitchen preparing special meals as well as using her beautiful decorating talents to ensure that Zion Chapel’s Fellowship Hall was beautifully decorated for special events. She was a gifted and talented woman. She was kind, humble, loving and enjoyed caring for others; in particular, she was a devoted Caregiver to many, especially her late sister-in-law, Helen Millsaps, and her late sister, Norma Millsaps, and her sister, Connie Millsaps. She was God’s chosen Angel on Earth. Mrs. Bessie Geraldine Reid accepted Jesus Christ as her Personal Savior at an early age at Zion Chapel AME Zion Church. She was a life-long dedicated and faithful member of Zion Chapel AME Zion Church in Hiddenite, N.C.

Mrs. Bessie Geraldine Reid loved her family. She leaves to cherish her memory her beloved husband of 60 years, Herman Reid, who survives and resides in the home. She leaves to cherish her memory one daughter, Regina (Fred) Pippen of Westerville, Ohio; one son, Patrick (Cassandra) Reid of Kennesaw, Ga.; four grandchildren, Cameron Reid, Simone (Jason) Curette, Michael Murphy, and Carina Reid; and three great grandchildren, Jasmine Alanna Reid, Cameron Reid Jr., Greyson Curette and bonus grandchildren and bonus great grandchildren. She also leaves one sister to cherish her memory, Connie E. Millsaps of Stony Point, N.C., and one brother, Lester (Edith) Millsaps Jr. of Stone Mountain, G. She is also survived by two sisters-in-law, Coetta McCleese of Orlando, Fla., and Mary Millsaps of Detroit, Mich., and one brother-in-law, Harry (Valetha) Reid of Statesville, N.C., along with one goddaughter, Toni Morrison of Statesville, and a host of nieces and nephews, cousins and close friends including her beloved beautician, Mrs. Jewel Flowers.

The family will receive friends from 12 to 1 p.m. at Zion Chapel AME Zion Church in Hiddenite on Monday, March 21, 2022. A funeral service will follow the visitation at 1 p.m. in the Church Sanctuary. Interment will follow at Iredell Memorial Gardens.

Bunch-Johnson Funeral Home is honored to be entrusted with the care of Mrs. Reid and her family. Condolences may be sent online to the family at http://www.bunchjohnsonfuneralhome.com.