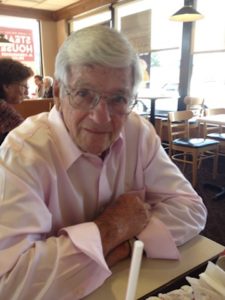 Frank was born December 14, 1930, in Lancaster, Pa., and was the son of the late Roy and Mary Miller Flory. He graduated from Lancaster PA High Schools and served honorably in the United States Marine Corps during the Korean War. On October 8, 1983, he married Cuma Poe Flory, who survives. He was retired from Johnsons Food Equipment and was a member of Bright light Baptist Church.

In addition to his wife, he is survived by one son, Mark Flory (Carmen) of Statesville; one daughter, Maria Tucker (John) of Maryland; daughter-in-law, Lisa Gragg of Statesville; seven grandchildren; one great grandchild; one brother; and three sisters. He was preceded in death by one son, Michael Flory, and one stepson, Mark Gragg.

A memorial service to celebrate the life of Frank Flory will be held at a later date. Memorials may be made to Gordon Hospice House, or anyone can plant a tree in his memory. Online condolences can be made to www.troutmanfuneralhome.com.