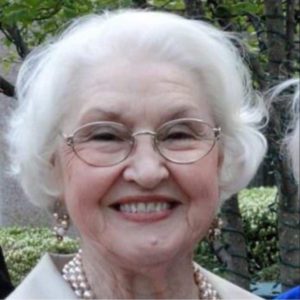 Mrs. Helen Hendren Jenkins, 88, of Statesville, N.C., passed away on Wednesday, December 21, 2022, at her home. Born on August 20, 1934, in Alexander County, N.C., she was the daughter of the late Josiah Glenn Hendren and Cleo Ober Meadows Hendren.

Helen graduated from Statesville High School, and married the love of her life, Ray Alton Jenkins, who enlisted in the United States Air Force. They traveled throughout the Unites States and overseas while their family continued to grow. Eventually, she and Ray moved back to Statesville to be closer to their families. Helen retired from JCPenney as a money room accountant for the Statesville location.

Helen was a strong Christian woman with unwavering love for her faith and family. She was a long-time faithful member of Fairview Baptist Church, and served her church in many capacities, including Sunday School teacher, choir member, and on various committees. Helen was the happiest when surrounded by her family during holidays, special events, and gatherings. At home, she enjoyed gardening, sewing, baking treats, painting and doing crafts especially with the grandchildren.

Visitation will be on Tuesday, December 27, 2022, from 6 to 8 p.m. at Bunch-Johnson Funeral Home in Statesville. Funeral service will be on Wednesday, December 28, 2022, at 2 p.m. at Fairview Baptist Church in Statesville with Pastor Scott Eanes officiating. Burial will follow in the church cemetery. Her body will lay in state at the church from 1 until 2 p.m. prior to the funeral service.

Words of comfort and shared memories can be made to the family at www.bunchjohnsonfuneralhome.com.